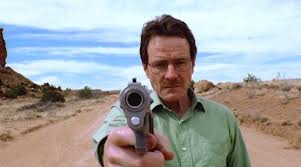 (650 words)
We all reacted with grave concern when our friend posted on Facebook he was thinking of doing something rash.

Some responded with caring, counseling he really needed to take a step back and think it all over.

Others were fatalistic saying, in effect, hey, you do what you think’s best. We’ll all still love you.

Me, I chose to apply some tough love.

“Mark, you’re an idiot! What you’re talking about is crazy! You goofball! Blockhead! Moron! Nincompoop!”

Our friend in Texas was thinking of watching the last episodes of “Breaking Bad” without first watching the introductory five seasons.

Doing so, I believe, would be like adopting a troubled but promising youth the day before his high school graduation party. The timing would mean you’d be missing out on all the triumphs and terror that have made raising the kid such a rewarding life experience.

I’m on adamant record that “Breaking Bad” is the best show ever and that we are in the heyday of series television, a medium so far superior to motion pictures it is no longer worthy of discussion.

In the last 10 years, discriminating viewers have had the time and the technology to binge watch on “The Sopranos,” “Dexter,” “Homeland,” “Justified,” and “Mad Men,” the latter being the one critically-acclaimed show Val and I never embraced.

Towering above them all is “Breaking Bad.”

It is the most lush TV viewing experience of our lives. It has the richest characters, the most compelling plots and the kind of emotional triggers that ping pong from horror to hilarity in the split-second time it takes the pin to hit the shell.

And I envy those of you who’ve never seen it.

Because now you can watch it all in one fell swoop.

That’s sort of how we did it. Time and indifference had made us miss the first four seasons.

Then on January 1, 2012 -- and I’ll remember the date with the same clarity as the days our darling daughters were born -- the stars aligned and we said, yeah, let’s give “Breaking Bad” a chance.

In, I swear, 90 seconds we were riveted. We stayed up until 2 a.m. -- even skipped “Seinfeld!” -- watching season one. We’ve never watched a TV series with such breakneck ardor.

Our very first exposure to the show about the cancer-stricken teacher who co-opts a former slacker student to build a methamphetamine empire to support his family left us addicted.

The only thing I can equate it to is back when really great bands used to make really great coherent albums and there was a communal feeling to sharing the music the instant it was released.

It was like in 1984 when Springsteen dropped “Born in the USA.” I was at the old record store the instant the truck came in. I bought it and drove straight over to Bob’s apartment. We called George and he showed up with a case of Rolling Rock. Then we called John and together we all played and discovered “Glory Days,” “No Surrender,” and “Bobby Jean” over and over and over again.

And that’s the feeling you get when you immerse yourself in a show this relentlessly compelling.

It’s a party and everyone’s invited.

That’s why I’m thinking of slamming the lid on the laptop and heading south to Texas to spend the next 48 hours with my needy buddy.

See, one of his Facebook friends turns out to be a bona fide AMC executive who was so alarmed at his stupid indiscretion she said she’d overnight him the entire series so he could catch up before Sunday evening.

So, yeah, I think I’ll soon be Houston bound.

My friend needs me.

Almost as much as I need “Breaking Bad.”

Our best TV day ever

“The Lone Ranger,” “Grown Ups,” and what’s wrong with Hollywood
Posted by Chris Rodell at 11:08 AM