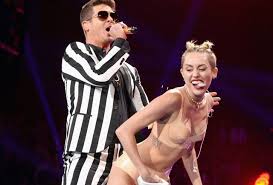 (747 words)
Two days later and still today most of America’s moral scolds are fretting over what we as a nation are going to do about that hussy, Miley Cyrus.

Something tells me a really good spanking might backfire.

It dismays me that so many are still talking about Cyrus’s lewd antics instead of the 50th anniversary of the March on Washington and Martin Luther King Jr.’s “I Have a Dream” speech.

So as to be less hypocritical I will now bring King into the discussion.

It was this great American hero who said, “Evil cannot be driven out, it must be crowded out.”

I think the same thing applies to crappy music.

If consumers cared as much about the people who make music as they do about the stupid little devices they use to play it, there would have been no time for someone with as little talent as Cyrus to be on the stage.

I swear, I never would have seen the Cyrus stunt if I hadn’t been duped by the scoundrels at “Good Morning America.” As revealed Monday, show producers said they would televise Latrobe’s Guinness World Record stunt of simultaneously peeling the most bananas.

And talk about your declining cultural benchmarks.

GMA instead devoted the entire morning to the VMAs, a celebration of an art form that’s disappeared from a network that once based its entire existence on round-the-clock airing of music videos.

Yes, video killed the radio star so MTV could kill the videos.

So I saw sort of by accident the Cyrus outrage and felt compelled to YouTube it.

It was to me the most bizarre premise for entertainment since a 1967 show called “The Flying Nun.”

She emerged from a giant robotic teddy bear and stuck her tongue out -- and to me that tongue is a marvel. It’s long and curvy and in contrast to Cyrus herself appears to have a mind of its own.

I’m not proud to admit it, but parts of me were turned on.

Well, one part of me.

That’s when singer Robin Thicke approached her from behind and appeared to have a go at her doggie style.

I watched this and thought, man, now there’s something you’d never see Susan Boyle do on stage.

And another national uproar was launched.

People want to hear from her parents, from her friends, from Disney executives and from opinion mongers eager to tell us what it all means.

Me, I’m maybe the only guy in the world who wants to hear from the man once known as Charlie T. Wilbury.

I want to hear from Tom Petty.

On a day when we celebrate Dr. King’s joyful prophesies, I’m saluting Petty who in 2002 foresaw the exact Cyrus scenario on his excellent disc, “The Last DJ.”

The record is a scathing critique of the music business that has so enriched his life.

His articulate contempt for where the music industry has been for at least the last 15 years is absolute.

And it’s no where more evident than in the maliciously sneering lyrics in the song simply named, “Joe.” It’s about a snaky music executive who would no doubt revel in the Cyrus performance.

Now, bring me a girl
They’re always the best
You put ‘em on stage and you have ‘em undress!
Some angel whore who can learn a guitar lick
Hey! Now that’s what I call muuuuuuuusic!

Oh, I wholeheartedly recommend it.

The guy’s sold more than 60 million albums and is one of the few popular musicians who’s risen to greatness without ever once having exposed a nipple.

I have a dream one day he’ll reveal it and music won’t suck so much.

American music and American Idol
Posted by Chris Rodell at 9:45 AM