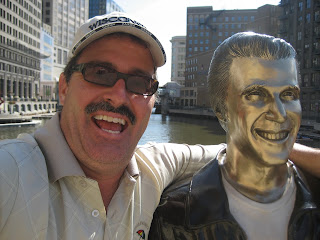 (737 words)
One of the real benefits of having a blog is that when anything really cool happens you just write about it, which is much simpler than learning, say, skywriting.

And, boy, if I ever learn how to skywrite, you can bet I’ll blog about it!

But last week I had two really bona fide cool things happen to me and I just have to blog about it.

I do this knowing full well doing so could be wildly premature.

Offers could be withdrawn. I could get arrested. The callers behind the proposals could cruelly reveal they were just messin’ with Sasquatch.

Oh, well. I’ve lived with disappointment before so we’ll just see what happens.

In the meantime, I choose to bask in being the recipient of two incredibly cool offers.

Yes, last week I was approached by representatives for international media conglomerates to be an on-air expert on two of America’s most indelible icons: Arnold Palmer and Elvis Presley.

Let’s start with Elvis, which is appropriate because as John Lennon said when asked if he liked Frank Sinatra, “Before Elvis, there was nothing.”

It will be 36 years ago Friday that Presley died at the age of 42.

We can argue back ‘n’ forth all day and night about what the greatest Elvis song is: Is it “Jailhouse Rock?” “Heartbreak Hotel?” “Hound Dog?”

About a month ago I reached out to the Graceland-based all-Elvis radio station on Sirius XM to see if they could tell me the top 10 most played songs for the story I’ll be posting on Friday. I included some of the links you’ll see below and was pleased to get a jiffy response.

We had a friendly back ‘n’ forth over a week that culminated with evening DJ Tony Yoken providing a list and of the most-played songs since the station launched Elvis Radio in July 2004.

And there was this: “If you ever come to Graceland, we’d love to invite you to ‘Guest DJ’ live in our Sirius XM Radio studio.”

I tingle every time I read that sentence -- and I read it about a dozen times a day.

How cool is that?

So I’m hoping sometime this fall to swoop though Columbus, Ohio, and pick up my buddy Quinn Fallon and road trip to Graceland.

Quinn owns the hot new Columbus bar called “Little Rock.” He’s also the great singer-songwriter for the band Los Gravediggers. So he’s one of the coolest guys I know.

And, get this, when he and Jessie got married in 2004, the ceremony was presided over by Elvis Presley!

They told all the guests it was an Elvis Presley impersonator, but I believe that was a ruse to foil the paparazzi.

I believe it was Elvis.

So that’s just great. I’m incredibly jazzed about the opportunity.

And I’m coasting on that good vibe all day when less than 12 hours later I get an e-mail from a buddy who works with Arnold Palmer.

I’ve written many times about my history with and fondness for Palmer. He’s just the greatest and I believe being able to say I’m in any way associated with him is the coolest thing about me.

There may soon be compelling video evidence of that latter.

My buddy said The Golf Channel was coming to Latrobe to do a lavish profile of Palmer and he was recommending they talk to me for an on-camera interview, providing, he said, I agree to shave, get a haircut and and wear a shirt.

Yes, the Palmer people know me better than the Presleys do.

I was so floored by the offer I told my friend I’d go one better.

I told him I was going to run out and get some new nose hair trimmers.

It’s the Wahl 5640-1001 Lithium Micro Groomsman Personal Trimmer. It does such a bang-up job on nostril hairs I’m thinking of seeing how it does in containing the thatch of backyard bamboo.

Of course, as I said, this could all be premature. My hopes of prominent international exposure could be dashed.

The fates could intervene. They could steal my euphoria, my self-respect and my last shred of dignity.

And that will make me sad.

But there’s one thing, I swear, no one can ever take from me.

And I’ll be cool with that.