Our adopted cat finds a home 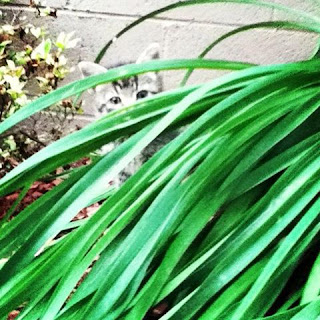 I guess it got my attention when the girls started including in their dinner grace a prayer to God that their daddy would start being nicer to the stupid dog.

It’s fair to conclude I’ve hated the dog ever since at least Oct. 2010 when I wrote this post I headlined, “I hate my dog.”

That was the year Val and I had talked about succumbing to the girls’ incessant begging to get them a dog.

My mistake was giving three sweet-hearted females the green light to pick up a dog without giving them a sensible blue print for how a dog should act and look.

First of all, a dog isn’t something you should have to stoop to pet and you shouldn’t be able to pick it up with one hand and put it in your purse.

A real dog should be of consequential dimensions.

Being in the room with Snickers when the door bell rings, a car passes or a single leaf falls to the ground causes him to react in ways that make my heart feel like it’s going to explode.

High-strung and nervous, he’s the Andy Dick of dogs. As I’ve said before, he’s the kind of dog more likely to ignite blazing fires than cuddle up in front of them.

So, yes, I hate him for reasons I believe make perfect sense.

But hearing my daughters narc me out to The Creator for being mean to a little animal is sort of a wake-up call. As much as it galls me to admit it, He must have created Snickers, too, so the plea is likely the kind of thing to sail right through His divine prayer spam filter.

And unlike the redundant prayers to end wars, starvation, despair and loneliness this is maybe the one prayer over which I have god-like dominion.

God can change my heart, but if He’s too busy it’s a simple attitude adjustment I can take of it myself. Who cares who gets the credit?

Besides, I’d hate to think of the girls sitting around the Thanksgiving table in 2019 all Gothed up and offering prayers to Satan and hearing my wife mutter, “You know, you really should have been nicer to Snickers.”

So into this mix strolls the stray cat.

And I’m not talking about Brian Setzer, which would have been really cool. I love him. Met him, in fact, back stage at a Stray Cats concert in 1982.

The girls heard her meowing when they were back down the creek that rumbles through the woods behind our property.

She was absolutely adorable.

I don’t know whether it was the girls’ prayers, my change of heart or the prevailing cuteness of the tiny feline, but I was kitten smitten.

She was cuddly, she was sweet, she was playful. She was everything Snickers is not.

And now after just eight days, she is gone.

Val was firm in saying she didn’t want another pet, even as she fell in love with the cat, too.

The girls took the cat to church yesterday and our wonderful pastor allowed them to her up with them to the children’s sermon by the altar. He told the congregation how we were trying to find a home for the stray.

A lovely elderly woman couldn’t help herself. After the service, she took the cat we never named to her home.

Me, I had mixed emotions.

I was really hoping this adorable kitten could be a healing bridge in the relationship between me and the stupid dog.

Now, it's just me and Snickers.

Either way, I’m more sure than ever that my daughters' prayers will be answered.

My heart is bound to be changed.

It will either soften or it will explode.

Glad I didn't know sooner or she'd still be here!