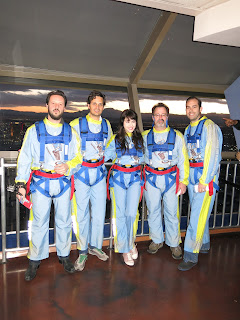 So let’s start with SkyJump at the Stratosphere because it was the most exhilarating  activity and the only one that involved at least a little nudity.

So, one week after turning 50, there I was on the Stratosphere’s 108th floor observation deck with three other reporters, our gracious host, and to add a dash of Vegas surreal, the voluptuous Claire Sinclaire.

It’s a common misconception that this is a bungee jump. In fact, it’s considered a controlled decelerator descent. You’re tethered to three wires that govern how fast you fall. A jump costs $109.

Lies about length & the manliest of men
Posted by Chris Rodell at 9:33 AM