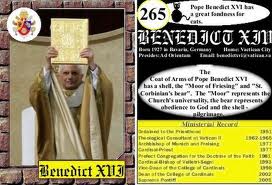 (636 words)
Looks like kids who collect Papal trading cards will soon be cutting class to engage in swap frenzies. Yes there’s a promising kid in the minors who’s on the verge of being called up by the Cardinals.

The Cards are looking for a guy with even more power than slugger Albert Pujols.

In fact, there are papal trading cards -- and I promise to let you know as soon as I find out if each pack comes with a thin stick of stale gum.

Citing reasons of reduced strength, 85-year-old Pope Benedict XVI is resigning, making him the first pontiff in 600 years to resign while still in office.

I believe the last one was Pope Richard Nixon.

I’m ignorant on papal duties, but I have to wonder how weak you’d have to be to resign from job where your staff includes things like shoe butlers.

I saw some recent video and he was still able to successfully raise his arm and wave and that’s all he seems to do.

I could understand resigning if the job description called for lots of arm wrestling with people of other faiths, but that doesn’t seem to be the case.

I know lots of guys who say they want to retire so they can play golf and spend more time with the grandchildren. I don’t see Benedict doing much of that.

What does one do when one resigns from the papacy? Move to Boca?

Given all the unseemly tumult surrounding the church, you have to wonder if he’s resigning to avoid some pending scandal, sort of like what so many college football coaches do these days when the NCAA snoops start showing up to chat with boosters.

We’ll certainly all be treated to some entertaining conspiracy theories in those regards.

Being one of those Twitter snobs who only follows people who follow me, I haven’t until today deigned to scour @pontifex for clues. Remember, he launched the account with huge fanfare in December.

Here’s an update: In a little more than two months, he’s tweeted just 34 times and, as you could probably predict, it’s been mostly really popey stuff like this from Jan. 30: “Every human being is loved by God, the Father. No one need feel forgotten, for every name is written in the heart of the Lord.”

But I have to wonder if he wrote it himself. That’s a lot of typing for a man too weak to wave.

The most interesting tweet I found was from Feb. 2: “God hates Ray Lewis and the Ravens, but Kaepernick too inexperienced. Happy G’hog Day!”

You won’t hear this from the poperazzi who cover the Vatican, but I think his embrace of Twitter is indicative of a man seeking more secular diversions.

Papal living must be very restrictive. You’re tightly controlled. You have to don a fake mustache if you want to run out for some wings at Hooters. Win at bingo and everyone thinks you cheated.

As he’s already broken ground with his Twitter account, I’d like to see him embrace a forum where he could reach billions of skeptics who’d like to see how a true man of God endures when tested by the most harrowing conditions known to earthly man.

Yes, I’d like to see him on “Survivor.” As past winners have shown, you don’t have to be imbued with physical strength to “Outwit, Outlast, Outplay” and win on the venerable CBS reality show that is -- hallelujah! -- returning this Wednesday!

Of course, for this to happen, he’ll certainly need the approval of an all-knowing, all-seeing and enlightened being who’d first have to judge it in the beset interests of humanity for it to even happen.

And shame on you if you thought I was referring to Jeff Probst.

I am the bar’s official Twitterist
Posted by Chris Rodell at 10:37 AM