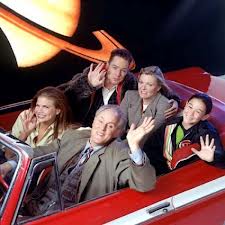 AMC is in the midst of re-running the entire season of "The Walking Dead" in advance of tonight's return. "Survivor" returns Wednesday. We're in the middle of enjoying full season DVDs of  "Homeland," "Dexter," and "Justified."

It's not that all the TV has us wishing we never had kids. It's just weekends like this make us wish we had someone nearby who could all day watch our kids while we all day watched our TV.

There are lots of really great TV shows on these days. So here's a salute to TV viewing from 2009, featuring highlights about why "3rd Rock From The Sun" is one of my all-time favorites.


My wife and I are the worst kinds of insufferable snobs who are always telling people at parties we never watch much TV. For some reason, this makes us feel culturally superior or at least equal to the people who lie back they never do either.

Some examples: “Father Knows Dick;” “Will Work For Dick;” “Eleven Angry Men and a Dick;” “I Brake For Dick;” “I Enjoy Being a Dick;” “Angry Dick,” and the sociologically relevant, “These Dicks They Are A Changin’.”

You should see the gape-jawed stares we draw in highbrow restaurants when I scream at her that she doesn’t know Jack about Dick.