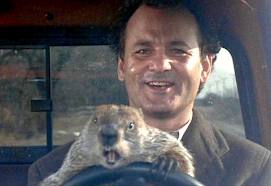 (922 words)
An alien emotion launched me out of bed at 5:30 this morning. I felt ambitious to be elsewhere.

There was still plenty of time. Punxsutawny is only an hour away.

But I’m not that kind of impulsive anymore and since I’m not pals with Charlie Sheen, I’ll be home all weekend sober and in front of the fireplace.

And that’s fine with me.

But a part of me wishes Charlie would have called Friday and told me to meet him at the airport.

I would have loved to have spent the day in Punxsutawney and then zoomed down to New Orleans in time for dinner at Pascal’s Manale, an Americana two-fer to remember.

I’ve had splendid times in both places so all the good memories have left me feeling a contact high all week. Here’s some scattered thoughts:

• My mother is a graduate of Punxsutawney High School, class of ‘50, so I’ve always felt a special kinship to this stress-free, offbeat holiday. Every year on February 2 she used to make Groundhog cookies. I want to stress: There’s no critter in Groundhog cookies.

• I’ve twice been to Gobbler’s Knob festivities. The combined high temperatures from both days totaled 11 degrees. Had a blast both times. It was 5 degrees up there today when Phil came out and predicted an early spring. As it’s on a Saturday, I lobbied for taking the whole family up there. The girls, guaranteed, would have been miserable and hated me for making them go. It would have taken them about four months to forgive me and realize it was something special. Understand, it would have taken them about that long to thaw out, too, so watching from home was wise.

• Why the 1993 Bill Murray movie “Groundhog Day” isn’t considered one of the best American movies ever is a reflection of critical snobbery. It is hilarious, romantic, inventive and when Murray’s Phil Connor character decides to save the decrepit homeless man he’d been ignoring the previous several hundred days or so, it shows something many other more critically acclaimed movies never show: it shows heart. His soulful pivot from selfishness to selflessness is as timeless a tale as anything conjured by Dickens.

• The Weather Channel billed today as “Decision Day 2013” and treated it the way the networks did the recent presidential election. It was very funny. I rarely watch TWC, but I can envision a day when I have time to be truly mush-minded devoting hours and hours to watching the soothing weather blobs floating across the country. It’s like a lava light with tornado readings.

• If it comes across as disparagement, it is unintended, but “Groundhog Day” is to Groundhog Day movies what “It’s a Wonderful Life” is to Christmas flicks.

• Many people are hoping the Ravens win; many others are hoping the 49ers so. Me, I’m hoping by tomorrow night I’ll have become reacquainted with that dashing Old Spice man.

• My love for New Orleans is only exceeded by my apathy for the Super Bowl itself. I can’t stand the thought of Ray Lewis winning, but I don’t want San Francisco to win because they’ll then equal Pittsburgh and our six Super Bowl wins.

• I’ve been to New Orleans five times, once on a deep-pocket expense account. After that revelry I’ve always said if when I get to heaven someone doesn’t say, “Welcome to New Orleans, here’s your credit card,” I’m going to start looking around for a suggestion box.

• The muffaletta from Central Grocer on Decatur Street near the French Market is maybe the best heirloom sandwich in any city.

• If you’re looking to avoid the TV and all that football tomorrow, may I suggest going to see “Silver Linings Playbook.” Val and I saw it this week and I think it edges “Argo” for our favorite of the year. It’s just fantastic.

• It’s still early in the year, but this I believe will be a contender for my best tweet of 2013: “The chances of rope aficionados referring to themselves as ‘Knotsies’ are about as slim as florists answering to the name ‘petalphiles.’”

• If my wife left me for the Old Spice guy, I’d understand and would hope our separation would be civil enough to let me visit him.

• I’m seriously thinking of DVRing the game tomorrow so I can watch the commercials and fast-forward through the tedious football. I’m hoping there are lots and lots of commercials featuring monkeys.

• I’ll respect the Harbaugh brothers if they scheme to avoid being filmed hugging each other at mid-field at the final whistle. By now, anything they do is going to seem contrived.

• The high tomorrow in New York City will be 29 degrees. The next Super Bowl will be played outdoors in New York. I hope it’s played in a monster blizzard because it’ll be fun to watch and because the NFL will admit it’s a mistake to make people pay $1,000 to watch a game while wearing parkas.

• I bet the Old Spice guy and the Most Interesting Man in the World are buddies. I’d never dream of paying to watch a Super Bowl, but I would pay $10,000 to watch those two play chess.