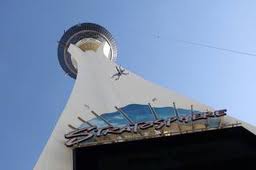 (704 words)
The kids’ goodbye hugs were extra precious and squeezy. Val called our insurance agent to check if my term policies were up to date. And the boys in the bar argued about exactly who gets the motherlode of my unused free beer poker chips.

I embarked yesterday on a trip that for five days would court nearly a dozen different types of death.

“Don’t kill yourself,” Val said as I left for the airport.

I wasn’t planning on killing myself. My fear was being killed by others.

Don’t take that as a reference to the high-profile slaying of a low-profile rapper about two blocks from where I’m staying on the 27th floor of the MGM Grand or a string of other violent crimes linked to the Strip.

No, the Las Vegas Convention & Visitor’s Association invited me and three other writers to what they’re calling “Extreme Vegas.” So over the next three days I’ll be bungee jumping off the Stratosphere, racing a Ferrari, choppering across the desert, zip lining down canyons and spending a day target shooting with assorted automatic weapons Joe Biden would rather I didn’t.

And, of course, to add to the fun I’ll be doing all this in various stages of inebriation.

Like an increasing number of the 40 million annual tourists, I don’t enjoy coming to Las Vegas to gamble. I figuring living my life as a freelance writer with a wife,  two kids and no real job is a big enough gamble. That, I guess, makes Val gutsy enough to be considered the Minnesota Fats of holy matrimony.

She just keeps letting it ride.

But I love Vegas for the food, the entertainment and for being a reliable cornucopia of human excess.

I wrote about various aspects of it nearly a dozen times from 2010-2012 when I was doing travel stories for msnbc.com before they slashed pay to levels too insulting for even me -- and some day when I’m feeling particularly bitter I’ll get around to telling that story.

Our hosts threw us a lavish introductory dinner last night at Craftsteak here in the hotel, with 6,852 rooms the third largest in the world. As the theme for the week is “Extreme,” every meal will involve some sort of extreme consumption.

Last night it was steak and Scotch. Fact: Two of the men at our table drank Scotch that was older than they were. And we’re just getting started.

Today’s lunch will be at Gordon Ramsay’s BurGR at Planet Hollywood. The place boasts it is home to the world’s largest burger, a fallacy that will give me the opportunity to be extremely boring as I tell them about Denny’s Beer Barrel Pub in Clearfield, Pennsylvania, the true home of the world’s biggest burger.

It promises to be a wonderful weekend, a great time if living it up doesn’t kill us all dead.

One guy is going to swim with sharks at Mandalay Bay and fly vintage pilot combat. There’s so much of this adventure stuff out here.

For subversive reasons, I’m looking forward to our afternoon at Guns & Ammo Garage Shooting Experience. Most of you know I believe America is plagued with too many guns and too many bullets.

The itinerary says we’ll be there for 90 minutes. It is my intention to in that time fire every last bullet in America so that the next mass killer will have to use as his lethal weapon a blunt instrument.

Of course, there’s a chance I’ll enjoy it so much, as so many others do, that I’ll renounce the more than 10,000 words I’ve written on behalf of sensible gun legislation and start using my blog to write poems of admiration for Wayne Lapierre.

Heck, anything to grow the readership.

So how I did I prepare for this testosterone fest? What did I do to ramp up my meager macho?

Yesterday, I spent five hours enduring one of the most soul-challenging ventures known to man.

Yes, I survived a non-stop Pittsburgh to Vegas commercial flight.

In the middle seat!