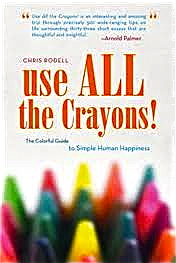 (778 words)
Two communications this week again caused my reality to war with my dreams -- and the Israelis and the Palestinians could learn hostility escalation lessons from that pair.

The first was from an old best buddy who’d called to congratulate me on my book and inform me he thinks I’m “livin’ the dream.”

“I mean, c’mon,” he gushed. “You’re your own boss. You have complete freedom. You see your family any time you want. You have this book out that is bound to hit huge. And, man, you have an office over a bar!”

As all the friends who think I’m “livin’ the dream” always conclude with that part about the office over the bar, you can surmise I’m not yet friends with folks like Oprah or Bill Gates.

His comments weighed on me so much that I was considering writing a post titled, “The High Cost of Living (like me),” which would detail the downsides of this Peter Pan sort of existence.

The post would be all about how the cost of living like me is waking up in the middle of the night distraught over never knowing from where your next paycheck is coming, how you live in dread of the next time the car makes a funny noise or one of the kid’s teeth starts coming in crooked.

It would describe how you daily feel like you’ve failed your wife who never signed on for this much instability, and how you try and convince yourself that today, finally, something good is going to happen that will make the hard times a memory.

And how you’ve been telling yourself that every single day since 1992.

But that’s all very depressing and I don’t think anyone reads my posts because they think, “Gee, I’m having a really great day. Where on the internet can I go that will suddenly ruin that soulful giddiness? I know -- Rodell’s blog!”

So today we’ve all been saved from that downer by the second note from my friend Huntington Sharp. He’s the senior editor at www.RedRoom.com. It’s a literary website that reaches more than 40,000 writers and publishing industry sorts.

If you’re a writer or would like to be one, I’d encourage you to join. It’s free and only good things happen there to anyone seeking encouragement or commiseration.

The site’s launching a classified ads section intended to help struggling writers -- folks just like me -- find readers and work.

What are they giving away to try and motivate people to get involved?

“Use All The Crayons!”

And again I must advise writers on the benefits of including a joyful exclamation point at the end of your title.

Just the thought makes me blush.

The page then features a cover shot and a lavish description of the book.

So that’s fine, a blog post that started out steering to dreary is saved by some sunshine.

Why stop now? It’s the perfect time to compose a classified ad of my own to submit.

But instead of being for today, my classified ad is for 2014 when it is my hope I’ll be truly livin’ the dream.

“Chris Rodell, best selling author of “Use All The Crayons! The Colorful Guide to Simple Human Happiness” -- soon to be a major motion picture -- is now accepting speaking invitations to universities and influential think tanks looking for a proven motivator whose previous engagements have led to spontaneous outbursts of mass cheerfulness, goodwill toward all people and the inexplicable cures for baldness, gout, erectile dysfunction and simple chronic halitosis. His requirements are $25,000, transportation, built-in free time to lavish on his wife and children and convenient access to an office with a bar beneath it.”

Of course, a reality classified would be much more grounded.

“Chris Rodell is like most writers in that he’s hoping enough of you will buy his book that someone will pay him to write another one. He understands grand success is elusive to all but the blessed few. Like most people, he’ll be happy if only he could make a little living doing something he loves. If you can help make that happen, he’ll be grateful and promise to do his best to help it happen for others.”

It’ll be interesting to gauge the content of Red Room’s classified ads. I’m sure many of them will be more like my second draft.

• Making bad days better
Posted by Chris Rodell at 11:52 AM