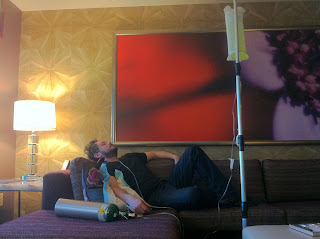 No, I’m feeling fit as a fiddle, a 17th century phrase originally intended to conjure admiration for how often tuneful violins improved any situation.

The knowledge now has me wondering if one day four hundred years from now cliche-prone happy people might often announce they’re feeling dandy as Xanax.

So the most hungover man in Las Vegas is bound to be Shaughnessy Bishop-Stall.

He’s one of the other three writers with me on this press trip to experience what they’re calling “Extreme Vegas.” Yesterday that included driving $225,000 Ferraris 140 mph.

I swear I could have gone faster but the entire time I was racing the Ferrari I was distracted by the knowledge that the vehicle I was operating for five minutes was worth more than the sum total of the all the crappy vehicles I’ve owned since 1985.

Shaughnessy is from Canada, the international neighbor Americans view the way Jerry Seinfeld viewed Kramer -- eccentric, entertaining, a bit of a mooch, but ultimately harmless.

Which naturally means Canadians must view us the way nervous people in parts of rural Michigan must view their neighbor Ted Nugent -- scary, reckless, prone to hysterical conspiracy theories and armed to the teeth.

Yesterday he was the most hungover man I’d ever met.

Maybe not in a purely physiological definition. Sure, he looked like hell and said he felt like hell, but he was at least ambulatory while truly hungover people were scattered in darkened Vegas hotel rooms moaning over and over things like, “Never again, never again.”

He was the hangover champ because the other sad souls had set out to get drunk.

Shaughessy’d set out to get hungover.

It’s the history of hangovers, hangover cures and how hangovers have altered world history.

He entertained us all with stories about how entire empires have turned because generals were too hungover to read things like rightside up maps.

Part of his visit to Vegas involves getting a hangover so ghastly he’d be a perfect candidate to check out the services of Hangover Heaven, a Las Vegas clinic that for  about $100 claims it can cure your hangover through intravenous methods.

I told my wife all about it and she was chagrined I hadn’t thought of writing a book on hangovers first.

“You’d be perfect for that,” she said. “You’re always hungover.”

Her comment once again reminded how if the Rodells were interested in earning real money, Val and I would co-write a blog that on one side of the page would detail how she perceived me while on the other side I’d write about how I perceive myself.

I haven’t had a “never again” hangover since, geez, I think it was last Tuesday.

We all spent a good bit of the day monitoring Shaughnessy’s well-being.

He’d done his part. He’d stayed up drinking like a maniac through about 4 a.m. He took a cab to Hangover Heaven. The place is nothing fancy, he said. Just a few chairs in front of a TV that plays an endless loop of the 2009 viva Las Vegas movie, “The Hangover.”

I wish I could say he experienced a miraculous cure, but that doesn’t seem to have been the case.

In fact, as we drove from the race track to lunch I thought we were going to have to ask the limo driver to pull over so our Canadian friend could vomit on the desert.

This might be unfair. I’m sure no one at Hangover Heaven would have prescribed their patients drive race cars pulling several Gs around the Las Vegas Speedway.

It’s bound to be an unsettling exhilaration to bodies of even sober folk.

In my experience, the only thing that eases a real hangover is lots of couch time and TV Land marathons of the old Andy Griffith Show. You just lay there and recuperate in a state that can best be described as nauseous bliss.

I’d usually start feeling a little better around 3 p.m. or when they ran the episode about when Barney and Andy try to save Otis, the town drunk, from detonating a dynamite-eating goat.

Val and the kids would never let me get away with a day like that again.

The recollection has me feeling nostalgic for the old days when I was single and free of parental responsibilities.

My very own hangover heaven.

Make me sick
Posted by Chris Rodell at 12:01 PM

Nice story about Hungover in Vegas, in this post you have shared one topic about instant Hangover Cure which is useful for all people.