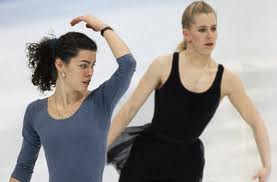 (738 words)
It is my fervent wish that by this time next year there will be cable channel that broadcasts nothing but stories about Tonya Harding and Nancy Kerrigan.

I’ll watch it ‘round the clock.

It may have escaped your notice, but exactly one year from today the whole world will be immersed in the competition and pageantry of the 2014 Winter Olympics from Sochi, Russia.

We will be mutually enthralled with the grace, skill and personality of athletes whom today we wouldn’t recognize if they were standing on our bare feet.

I love the Olympics, especially the winter games.

I love hockey, the downhill, the luge and spending hour after sudsy hour in the bar trying to concoct an international tavern sensation that could rival a “sport” as silly as curling.

But one of the things I’m most looking forward to is that 2014 will be the 20th anniversary of one of my favorite news events of the past 40 years -- the Battle Royale of the American Ice Princesses. It’s an anniversary networks will find irresistible.

It was January 4, 1994, at the U.S. Figure Skating Championships in Detroit. Kerrigan was heading to the locker room when a burly thug emerged from the shadows and gave her right thigh a vicious whack with a telescoping asp baton.

And a sickened nation asked why.

Kerrigan, as you may recall, asked “Why! Why! Why!”

The incident launched a three-month media circus that consumed America.

Everyone was shocked when we learned Harding, Kerrigan’s arch rival, ordered the attack and within days it was impossible to get into a conversation that didn’t involve the name Gillooly.

The most compelling feature of the story, to me, was the odd trajectory of the two protagonists.

Kerrigan finished second to -- useful trivia alert! -- Oksana Baiul and the moment she ascended to the silver medalist platform was the exact moment when her popularity began a precipitous slide from which she never recovered.

Because while Baiul, a winsome Ukrainian, was backstage composing herself for the ceremony, a live mic picked up Kerrigan bitching, “Oh, c’mon. So she’s just going to come out here and cry again. What’s the difference?”

It only got worse from there. She skipped the closing ceremonies so she could go fulfill a $2 million promotional opportunity at Disney World where she -- get this -- dissed Mickey Mouse!

With a pained smile plastered on her face, she was caught on TV waving and actually saying, “This is dumb. I hate it. This is the corniest thing I’ve ever done.”

And with that millions of Americans began siding with Harding and her stooges saying, in effect, you know, maybe Kerrigan had it coming.

And you thought Romney-Obama was divisive.

The two then skated off into D-list celebrity, now mostly forgotten by an America that’s moved on.

Me conducting a joint interview with the two of them is my dream assignment, my Frost/Nixon.

That’s why I’m hoping a cable channel will spring up to lavish attention on the episode and its sordid aftermath. Guaranteed, the ratings would be huge.

And thanks to the International Olympic Committee, I now know a way to conclude the coverage that would ensure blockbuster ratings.

Have Harding and Kerrigan wrestle one another.

I’m among those outraged that the IOC decided 2016 will be the last year for Olympic wrestling.

They say it’s because wrestling ratings stink, but I suspect corrupt motivations.

These IOC people are immoral. They allow themselves to be chauffeured around the globe and lavished with hookers, free golf and fine meals in exchange for their favors.

Just who do they think they are? Freelance travel writers?

Maybe more than any other sport, wrestling, an Olympic event since 708 BC, belongs in the games.

Think about that -- 708 BC! That means there was a chance Jesus Christ watched Olympic wrestling, assuming, of course, he had basic cable.

Or, more germane to today’s discussion . . .

How come Olympic gymnasts rarely smile?
Posted by Chris Rodell at 11:53 AM