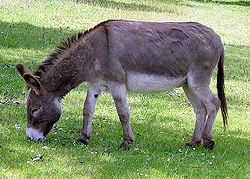 Hearing Katie Couric tell Jay Leno that Donald Trump’s been “acting like a jackass” made me wonder if the female counterpart to stupid behavior is “jillass.”
Of course it is, according to Urban Dictionary.com, that reliable bastion of ribald and filthy street definitions.
But the term’s never caught on. I wondered about why to a friend and he suggested  there’s already a perfectly suitable word for that kind of behavior.
“The word is blonde,” he said.
Now, there’s no more politically correct observer than I so I immediately reprimanded him for the gratuitous insult.
To jackasses.
It was unfair to compare fair-haired women to these noble and much-maligned beasts of burden. It was the jackass -- not its equine cousin the horse -- that helped win the West.
As Hampton Sides related in “Blood and Thunder,” his outstanding 2006 biography of legendary Western scout Kit Carson, the donkey, not the steed, was his mount of choice.
It got him over jagged mountains, across deserts and was a steady companion through both blizzard and drought.
With all due deference to blonde women who certainly had a hand in providing order and entertainment in frontier homesteads, schools and brothels, they’re no match for the donkey.
How did this trusty creature become synonymous with behavior of the kind exhibited by the idiot Trump?
And just what is a true non-human jackass? Is it a mule? Donkey? Burro? Ass?
Only the performer/producer/entrepreneur once known as P. Diddy has more handles.
Well, the jackass is a male donkey; a female, a jenny.
(I told this to my blonde-bashing friend and he felt vindicated: “Yes, like Jenny McCarthy!”)
In Latin, it is Equus africanus asinus. The name donkey didn’t come into use until 1785 and may stem from its dun color or that one was once owned by a man named -- get this -- Duncan.
Gotta love that scholarly Wikipedia research!
The online en-pseudo-pedia goes on to say the donkey’s keen -- I would say wise -- sense of self-preservation led to its enduring reputation for stubbornness.
Is it stubborn or wise for a donkey to resist being pulled along the cliff edge of some steep mountain pass?
No more stubborn or less wise than it is for me to spend endless days on my couch watching “Bonanza” marathons rather than risking going out to work in a world rife with stray bullets, e-coli and heart-attack inducing 9-to-5 jobs.
“Donkeys appear to be quite intelligent, cautious, friendly, playful and eager to learn.”
None of those words apply to Trump.
“They are often pastured or stabled with horses or ponies and are thought to have a calming effect on nervous horses. If a donkey is introduced to a mare and foal, the foal will often turn to the donkey for support after it has been weaned from its mother.”
So I misinterpreted all those many times people have called me a horse’s ass. It was really a compliment on my steadfastness.
Jesus rode to Jerusalem and eventual glory on the back of a humble ass.
More than 2,000 years later, a man we can all agree is an egotistical ass rides around in a custom chopper with his gaudy name on the side.
And it isn’t Duncan.
That one word can used to describe two beings of such vastly different temperaments is just, well, I hate to say it, asinine.
The word’s another sly slam on an animal that’s never self-aggrandized, corrupted the public discourse or strolled about in public with a preposterously coiffed mane.
Enough’s enough.
Let the rehabilitation of the true jackass begin right here.
To do otherwise would be trumpinine.
Posted by Chris Rodell at 1:43 PM

I and my two other asses thank you for your noble effort to rehabilitate our kine.

My jacks are named Edgar and Rice Burros. A while back, I heard of someone who named their humble beast Hotay. That's right ... Donkey Hotay. We are nothing if not literary asses.

I haven't known an editor with so many asses since I was a reporter for a small satellite office way outside Pittsburgh.

Those are great names. Have you ever met a llama owner who named the livestock Dolly?