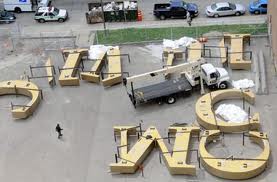 I gaze upon the spectacular skyline of Pittsburgh and think of board games. Not Monopoly, as you might expect or other pastimes involving skyscrapers and property values.
Nope. I think of Scrabble.
I think how can I take all these massive letters littering the view and string together some words to express my contempt.
Travel experts routinely include Pittsburgh among the list of the most beautiful cities in the world. It also does well in literacy rankings.
It ought to. You can’t stare at the photogenic city without being forced to read the names of all the corporations intent on making their names even more ubiquitous.
There’s UPMC, BNY MELLON, HIGHMARK, K&L GATES, CITIZENS BANK, FEDERATED and on and on and on.
Of course, it’s mostly done in that ANNOYING ALL CAPS style that never fails to tick off us connoisseurs of subtlety.
Where did it all begin?
Blame PNC Park (more evidence of disgraceful corporate naming shenanigans).
It’s the jewel-like ballpark along the north shore banks of the Allegheny River and home to the Pittsburgh Pirates -- and let’s save picking on them and whipping boy owner Bob Nutting for another day.
When the park opened in 2000, architectural critics immediately hailed it as the most beautiful in America. Magazines featured lavish hitter’s eye view pictures from home plate.
It dazzles still. There’s the diamond, the lush outfield, and soaring in the background across the river the mingled mix of old and new, brick and glass, rustic and refined that combine to make the city’s dynamic skyline.
The park is magnificent enough to be a popular site for elegant weddings. I attended one of them -- best of everything always to Howard and Mary! -- and I couldn’t have had a more splendid time.
The food was sumptuous and the appointments exquisite. And as for the view from the club level lounges, well, Will and Kate should have had it so good.
In 10 years, the vista has become the second most photographed spot in Pittsburgh, second only to the sublime shot of the city from atop Mt. Washington.
But whenever you point a camera at anything in America today there’s always bound to be a marketing guru ready to spring into the viewfinder intent on waving the name of some insurance company to spoil the scenery.
That’s what happened in Pittsburgh. Because of baseball and its designation to host often high-profile events like the G-20 in 2009, the city is frequently featured in the national news.
That’s good. I want people everywhere to know why I love Pittsburgh.
But in an age that exaggerates the importance of name recognition over accomplishment -- think Charlie Sheen or Donald Trump -- corporate overlords sensed opportunity.
They instigated a rash of placing their neon names atop once majestic skyscrapers Pittsburghers already instinctively knew.
It’d be like if our neighbors got BOB and SUE tattooed on their foreheads to remind us of their existence.
And where do they get all these giant letters?
Is there a big letter store somewhere you call and place an order?
“Yeah, I need an M, an E, two Ls, an O and an N sent over to Grant Street. What’s that? You’re running a special on Qs? I know a VP over at COMQUEST. Let me see if he’ll go in with me. OK?”

I imagine delivery of all these letters coming down the interstate on the back of a trailer would look like some PBS learn-to-read special or maybe a page from the colorful children’s book, “CHICK-A-CHICK-A BOOM! BOOM!”
I’m always tempted to tinker with the sign lettering down at the local elementary school so instead of a cheerfully educational slogan about reading it'll say something like, “WE ROAST CHILDREN HERE!”
But the obnoxious corporate branding of the city I love has me thinking of something more monumental.
I’m going to get a helicopter and surreptitiously maneuver it around the city until I can fix some of the massive letters together in a sign that reads: “THIS LOOKS REALLY CHEESY!”
I’ll just have to be careful I don’t inadvertently contribute to the problem by stringing the letters up atop a building that houses Kraft Foods.
Posted by Chris Rodell at 9:07 AM

You may have a point about when the corporate branding really took off in Pittsburgh--I haven't lived there in quite a while. But don't forget the CLARK, WESTINGHOUSE, and ALCOA signs that were visible every night in Pittsburgh back at least as early as 1990 (when I was in town).

I have to say, I liked those signs--they were a little more aesthetically pleasing than the block letters you describe--but it would seem that they are symptoms of the same problem and maybe the actual root.

The Alcoa sign's a classic. I saw a picture of the city from about when you were there. It looked so much better. It's just so ubiquitous.

Thanks so much for reading and for taking the time to comment.

Have a great week!