A grave story about cemeteries 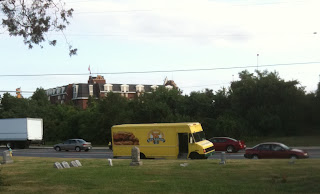 Forgot to mention one other amenity on the grounds of our 81-acre mansion.
It had a cemetery.
That’s not so unusual. Our back lawn, for instance, has a cemetery. It’s the eternal resting place of two hermit crabs and two frogs, whose names I never bothered to learn, and of Buster, the 18-year-old cat who finally expired in 2007.
My eyes still mist over whenever I look at where I buried Buster -- certainly not for sentimental reasons. I think it’s residual sting from the barrels of ammonia I used to clean the stinking litter box of an animal I never liked.
There’s nothing really very sacred about our little pet cemetery and the kids wouldn’t care if I clipped too close with the John Deere, which I do whenever I ever feel like taunting Buster’s still-foul-breathed spirit, I’m sure.
The cemetery at Far Away Point wasn’t the final resting place of neglected and disliked animals.
No, buried there were about 20 dead millionaires.
You can tell you have a spacious property when you say, sure, go ahead and plant Uncle Fred out under the willow way out back.
Having so many dead relatives on my lawn would be emotionally disruptive to my peace of mind.
I’d miss a few of them and that would make me sad. I’d be forever agitated realizing that one or two of them probably died owing me some money. And there’d be a few whose deaths brought me comfort and I’d feel like a bad person every time I silently rejoiced at the site of their tombstones.
And those are just my people. There’d bound to be in-laws in among the mortal mix.
Having their graves so tauntingly near would test my conscience every time my bladder filled.
It’ll be an odd recollection, but one of our liveliest vacations will be surrounded by memories of graves.
We stayed Sunday evening at a perfectly comfortable Holiday Inn Express in Annapolis.
It is nearly surrounded by tombstones. It’s in one of those old neighborhoods where urban sprawl was rapacious enough to devour even the graves.
Well, most of them.
Right behind the hotel is a traditional walled cemetery up against the delivery docks of a trendy Whole Foods Market. Then right there on the traffic island separating Riva and West roads is a cemetery with about 15 tombstones.
It’s one of the oddest cemeteries I’ve ever seen. It is just right there in the traffic triangle. It seems so disrespectful, not to mention dangerous. It was loud. Exhaust fumes choked the air. I swear if you listened closely you could hear the coffins coughin’.
Then right down the street was a military cemetery so respectful it wouldn’t surprise me to learn they buried the dead standing at attention. The rows were immaculate, the lawns well kept.
Like the haircuts of the sailors buried there, it was all high and tight.
A nice cemetery is supposed to be all about the view. But whose view?
The dearly departed’s? That makes no sense. Toes up is the default burial position for even those of us who’ve spent our lives sleeping in fetal positions. Everyone, at least those with supernatural vision, is either looking at the sky and straight up the nostrils of anyone paying their respects.
If we truly cared about the comfort and the view of our late loved ones we’d bury them all in adirondack chairs from the neck down, a posture that would certainly challenge the weed-whacking skills of any hungover groundskeepers.
What’s to become of me?
After much careful consideration, I think I’m going to ask I be buried on a busy traffic island.
My tombstone will read, “Honk If You Miss Me!”, offering a drive-by sort of mourning. Truck backfires will seem like 21-gun salutes. And any refuse that collects against my stone will be trashy tribute to a tree hugger who spent so much of his life stooping to pick up the litter of others.
Best of all, anyone who felt the urge to urinate on my grave -- and there’s bound to be a line -- will likely get run over by errant bread trucks before they even get their hands on their zippers.
I’ll be sure to rest in peace knowing I’ve greatly reduced the chances I’ll, yuck, rest in pee.
Posted by Chris Rodell at 1:42 PM

Reminiscing story that is. It reminds me of my pet who passed away. And the services were really awesome way back then.

Thank you for reading! I'm sure you've helped many grieving pet owners get through difficult times.

Hi Chris, I am happy with your blog because it captures every reader who has their own pets and those who lost it.