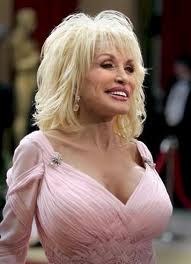 So I’m driving down the road when I become consumed with thoughts of Dolly Parton’s sexuality.
It’s like she was constructed in a secret lab to inspire every boy’s first erection.
I’m not a breast man but, man, those breasts. I wonder if her cleavage is visible from the International Space Station.
I’m listening to a country radio station and she and Kenny Rogers are singing “Islands in the Stream,” an innocuous 1983 Bee Gees love ditty.
I wonder what’s going on in Rogers’s mind as he swaps verses with Parton. I’d bet $1 million I can guess.
What’s simultaneously going on in Dolly’s mind, I can’t begin to fathom, but we can probably rule out she’s thinking about doing to Rogers what Rogers is probably thinking about doing to her.
Rogers has been married five times and has fathered five children.
There’s no evidence that Dolly at 65 and for four decades one of the most sexual looking beings on the planet, has ever actually had sex. She’s reared no children or been linked to any illicit lovers in a scandal-free life spent entirely in the spotlight.
She’s married, or so we’re told, but there are endangered spotted owls more outgoing than Carl Thomas Dean, the man she wed in 1966.
Yet, every time I hear Parton sing, read something about her, or see her acting or yapping on TV, the very second thing I think is, “Wow, that Dolly Parton is still so cool.”
It’s true.
She’s just so cool.
“I don’t resent dumb blond jokes,” she says, “because I’m neither dumb nor blond.”
When Oprah asked her in 2003 if she’s ever had plastic surgery, she said, “If I have one more face lift, I’m going to have a beard.”
The first mammal ever cloned was born in 1996 and named Dolly in her honor (the sheep’s creators said Parton was the inspiration because the key cell was extracted from an ample mammary gland).
Parton’s response: “Hey, there’s no such thing as baaa-d publicity.”
She’s one of the most beloved people in entertainment. New York Magazine recently did a story about her and it was evident the jaded writer wanted very much to expose her in ways that had nothing to do with the ways Hugh Hefner’s tried in vain to expose her.
But the story couldn’t be more generous or flattering. It says she’s unfailingly kind. She treats everyone the same. She’s a joy to be around. She makes everyone feel better about themselves just by being in her orbit.
It made her sound in so many ways like Fred Rogers with 48-DD breasts.
She’s just 4-foot-11 but projects in ways more vast than a Macy’s Day float, all big and unnatural. Just the sight of her makes you want to stroll down Fifth Avenue with her on the end of a really long pole  -- and please don’t read more into that than there already is.
The announcer said Dolly -- the singer, not the sheep -- has a new album, “Better Day,” coming out this week.
I hope it does gangbusters. I just love Dolly. She’s a remarkable and uniquely American creation. Both Barbara Streisand and Jane Fonda are more critically acclaimed, but no one is more beloved and admired than the The Backwoods Barbie.
I’m thinking of all this after I’ve thought about the very first thing me and men like Kenny Rogers still think about when we first think about the ever-audacious Dolly.
They can clone sheep, but there’ll never be another just like Dolly.
No one will ever fill her shoes.
Not to mention her brassiere.
Posted by Chris Rodell at 2:50 PM

If you want to know even more about Dolly Parton, I suggest you go to Dollywood. I don't know Dolly, of course, but if I did, I suspect that Dollywood is something like Dolly with rollercoasters. And don't read anything more into that than there is.

I'll bet if you look deeply enough into certain parts of Dolly, you'll find rollercoasters zooming around in there.

Dang. I read too much into that, didn't I?

Great post. Dolly may routinely nip, tuck, lift,... her bodacious bod, but her personality always comes across as genuine and genuinely nice and funny. Gotta love her.

I'm right there with you, Keith. I love Dolly! She's glorious!

After visiting her home town and, of course, Dollywood, we quickly learned how much she is loved. We spoke with a Chief who said she is one of the most genuinely kind people he knows. In sone wYs you are right Chris, she is a lot like our Mr. Rogers. Blessings friend. Stay safe.