The True Adventures of a Money Repellent's lost wallet 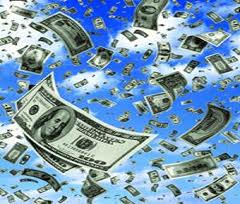 I’d already scoured the house about 15 times when I thought it was time to dissect the dog.
Maybe my wallet was in there, the only place I hadn’t already looked.
But that would be messy and, man, I’d look like a really bad father if the leather wasn’t in there.
So I put the knife back in the drawer and as I’d done for much of the previous hour told myself, “Think, idiot! Think!”
Then it clicked.
I’d had the wallet and a two-page printout of a news story with me when I went to buckle the girls in Val’s car before they departed for school.
I dimly remembered setting the wallet and the papers on the trunk. I walked along the driveway. Nothing. I looked along the yard. Nothing. Then there down the street, I saw a sheet of white paper pinned to a jagger bush along the road.
It was the second page of the print out.
My wife and I pay the bills together, but our finances are totally separate. It’s worked for nearly 15 years of marriage and has prevented Valerie from dissecting me to learn if I have a brain.
We couldn’t be more different about money.
She’s very careful with her money. I contend I am, too, but in a more Buddhist sort of way.
I consider having gone nearly 20 years without a real job or steady paycheck an amazing achievement. Sure, plenty of other people have done that, too. But most of them don’t have homes, families, or fat and happy scrapbooks with memories from great vacations.
I’ve come to the conclusion I’m a fun magnet, but a money repellent. And that’s how I deal with life.
Life will allow me lots of fun and friendship if I understand it’s never going to allow me a lot of loot.
So you can sense the difficulty of informing her -- someone who sort of shouts “Boo-yah!” when her checkbook balances to the penny -- that my wallet and $125 cash were gone.
I’d spent the previous day on a South Side frolic with a friend from New York City, the one who was hosting me in Manhattan the day I nearly died from dim sum.
He’s one of the cheapest people on the planet, but also one of the most entertaining.
So I always carry more than the usual amount of cash when I’m going to see him. The sum was what I had left.
Squandering money on cheap friends of dubious character is one thing. But just setting it free on the breeze was very upsetting.
To me, too, sure. Then there was this.
I have an unshakeable faith in my fellow man. I really do.
I was confident someone would either find it and turn it in intact or we’d find it along the side of the road.
Guess what happened.
“Some guy found it and returned it,” she said later over the phone. “He said there was $5 in it. He left a note and a number.”
It was a guy from a nearby road crew. The wallet had ridden the rumble seat for nearly a mile before ejecting.
My initial theory was that finding my wallet inspired an unusual ethical conversation amongst a group of young men whose usual chats center on how many Jager bombs it takes to get women to start removing their clothes.
I speculated they said, hey, let’s return the wallet and tell the guy all that was in was the five.
But after talking to Phil I believe he told me the truth. He said they found the wallet splashed on the side of the road. Its contents scattered. That means I believe him when he tells me two $50s and a $20 blew away and only a $5 remained.
Really, being such a money repellent, I’m surprised the bigger bills didn’t vanish and the measly $5 didn’t magically turn into three quarters and four cents.
“I never even thought of keeping it,” he said. “I saw your driver’s license and just drove it right to your house.”
I asked Phil for his address. I’m going to send him a check for $25 along with a little note to his kids advising them  their Dad’s a good man and to listen when he tells them about the difference between right and wrong.
As for the bills, who knows?
I can only hope they blow around the globe until they’re seized by a good man, a family man, someone who is as conscientious as he is generous.
Someone like Phil.
So the best I can hope for is that maybe one day Phil and I will meet in a friendly tavern and we’ll hit it off. Maybe he’ll buy me a beer or two with some of the money that was once in my pocket and flew around the world into his.
Thus ends another episode in my life as a fun magnet/money repellent.
Who knows what adventures today will bring?
I’m sure my poor wife will find it thrilling.
Posted by Chris Rodell at 9:24 AM