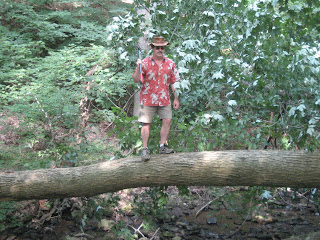 I shall treat the giant oak that crashed on our property the way Native Americans used to treat the revered buffalo.
I shall respectfully use every bit of it.
When it fell Monday it sounded like a barrage of firecrackers. But when I strode into the woods to investigate I saw it wasn’t mischievous kids.
I saw what seemed to me a gift from the great Earth God.
I’m disposed to speaking like an Indian lately because I’m in the middle of Nathaniel Philbrick’s “The Last Stand: Custer, Sitting Bull & Little Bighorn.”
Philbrick portrays the Gen. George Armstrong Custer as an ill-advised preening egotist who’d do or say anything to get his name in the headlines, sort of like Trump with better hair.
But the Indians, as they always do, come across as noble victims of cruel palefaces intent on their extermination to quench rapacious land needs.
Before the arrival of my ancestors, the Indians lived mostly at peace upon the land, they wanted not for material goods, they dealt fairly with the peoples they encountered.
I’m guessing the part where reservation casino patrons bitch about rigged slot machines is toward the end.
They had all they needed.
They had the buffalo.
Philbrick writes that each Indian consumed about six buffalo a year.
Six! The average buffalo weighs nearly a ton. I can only guess that meant the average Indian weighed something like 825 pounds.
And when I say consumed, I mean consumed.
There wasn’t horn nor hair left when the Indians were done harvesting the big shaggy.
Check it out:
Hide uses included moccasins, cradles, sheets, shirts, pipe bags, dolls and teepees.
Hair was used for pillows, rope, saddle pads, headdresses and medicine balls.
The tails became fly brushes, whips and decorations.
The hooves and feet were made into glue and rattles.
Rawhide uses included tepee walls, shields, lances, drums, pouches, boats, buckets and rope.
Trumpet-like horns were made into cups, toys, spoons, ladles and trumpet-like horns.
And every single morsel of meat was devoured.
It makes me wonder how resourceful squaws responded each and every meal for their entire lives whenever the family said, “C’mon, not buffalo again!”
An 18th century Great Plains entrepreneur selling pepperoni pizza by the slice would have made a fortune, although it seems likely he’d have been paid in buffalo skin currency so the point may be moot.
Now, I can’t do with a 100-foot dead tree all the Indians did with a buffalo, although there have been times in my career when things were so bad I’ve thought about boiling tree bark for breakfast.
But the tree’s now grounded canopy -- and two others it took out with it -- will for a while make a dandy playground for the family.
The creek had eroded the root system and top heavy tree split leaving two splintered sides upright like football goal posts.
The massive trunk now bridges 50 feet of the creek about 20 feet up. That’s an ax-wielding me in the picture above. I scampered out in the middle of the bridge for Val to snap a keeper picture of me looking like a real he-man.
The picture’s composition is weak and looks hurried because I had to cut the photo session short when my fear of heights had me nearly wetting my pants.
That won’t matter as I bit by bit chainsaw the bounty to use for firewood to warm my loved ones as the winter storms batter the house. I intend to save a gnarly section to polish into a ceremonial mantle for the living room.
Like the Indians whose distant culture still holds me in its compelling thrall, I shall want for nothing.
I shall be at peace with myself and all who share my existence.
That is unless the great Earth God snaps a tree across the TV cable feeding the house with nearly 1,000 channels of hi-def entertainment.
Then the family and I will have to turn nomadic for at least until Comcast comes for repairs.
We’ll roam the countryside like the Indians I so admire.
Where our tribe will wind up, who knows?
I hear Buffalo has lots to offer.
Posted by Chris Rodell at 8:45 AM