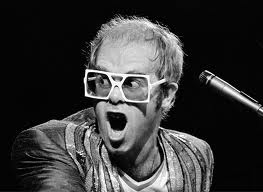 Saying a story in the New York Times “caught my eye” makes it sound like the headline reached out and snatched an eyeball right out of my head.
That’s never happened, but if diminishing eye function trends continue we may one day see strangers thanking one another for snagging their eyes moments before they rolled away into city sewers.
Pretty women will shy away from wearing eye-catching dresses for fear a stroll down the sidewalk would be like an afternoon being bullied at the paintball playground.
The story says American nearsightedness has jumped from 25 to 42 percent since the 1970s.
The reason?
Too much time spent indoors reading from artificial light.
As the writing son of an optician, I’m torn -- and not in any way requiring emergency room suturing.
I don’t want to do anything that will discourage people from reading, even if the way they’re reading eventually renders vital organs as useless as scrap appendix.
Researchers say ancestral eye sharpness developed in bright natural light -- and by natural light they mean sunshine.
I have to keep reminding myself of that because for nearly 30 years natural light to me has meant beer sign neon including ones that further confuse by saying, “Natural Light.”
They believe bright outdoor light helps developing eyes keep vision in focus. Artificial lighting doesn’t measure up.
It’s just one reason you don’t see many homeless people in Armani frames.
Ideally, people would take books, newspapers and (and blogs!) and read them outside in the glorious sunshine.
But where does that leave those of us in places like Pittsburgh? If we want to go outside and sit in the sunshine we usually have to get in our cars and drive to Myrtle Beach.
Plus, the story doesn’t differentiate between printed and illuminated words.
I suspect I’ll always prefer the printed word to slick e-versions. I still love the feel of books and hold them the way adolescent boys used to hold porn before it all creeped on-line, a setting I still maintain is too conversely sterile for acts that at heart are procreational.
Well, maybe every once in a while.
But our house up in the woods is so dark I can envision a day when I’d want an e-reader to take advantage of backlit screens and the ability to increase the type size.
It just seems like a wonderful convenience that would reduce eye strain in a place where lighting is dim enough to make the common Townend Big-Eared Bat squinty.
It may seem strange that a guy who’s spent his whole life shunning supervision would come out in favor of Super Vision, but I’ve always been alert to eye care.
The importance of taking care of my eyes was something that was drilled into me from a very young age -- and that’s just another expression and not some deal the optical department at Sears gave free to the kids of the employees.
I’ve worn glasses mostly since the eighth grade. As I scored them free, my collection rivaled Elton’s.
Sure, for a few vapid years I tried contacts for reasons of vanity. I thought I’d look sexier to women I was trying to date.
This didn’t seem to work, I guess, because the women I tried to date all seemed to have Super Vision. They’d take one look at me and see multiple flaws.
So I went back to big nerdy glasses that concealed more of my face and things began working out fine.
Now I fear the progression of nearsightedness is jeopardizing my plan to have 2020 declared “Year of the Visionary.”
Either way, I promise to keep an eye on the news.
If you see it rolling around down there, I’ll be grateful if you’ll pick it up and stick it back in my face.
Posted by Chris Rodell at 11:26 AM

The father of a friend of mine lost an eye to cancer. As kids, we secretly wished he would joke with us by popping out his glass prosthetic, tossing it to us and saying, "which one of you kids will catch my eye today?"

But he never would. He grew to believe that his glass eye was a vanity, and eventually had his eye sewn shut. And THAT was the end of all our jokes about catching eyes.

My Grandma has one (she is 105, as of this writing) and it was a source of wonderment to me as a child. She would occasionally take it out - I believe she had to more-or-less oil the socket for comfort - and I wanted to see it/didn't ever want to see it in fairly equal measures. Never did see the socket, and I am grateful for that now, I think.

As for printed versus electronic, I print out the blogs I wish to read, as opposed to scan, because I can then take them outside during a break and enjoy them more that way. Yours is one I've printed out, for what that's worth.

Thanks, H.H. and Suldog. My favorite glass eye story is the Dean Martin bar bet from "Sons of Katie Elder." Love it.

I like, too, Suldog, your method of printing out stuff and am flattered you're including my stuff among that group. I know you keep your eye on a bunch of worthies and to be included is high praise.

Hope you're both doing well. And thanks, as always, for reading!