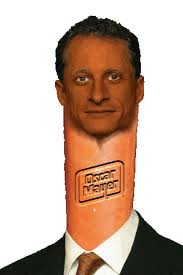 You’d think a guy eager to keep his blog fresh with timely observations about any national silliness would be all over the Weiner tweets.
But, right there, you just read part of my reluctance.
Just typing Weiner tweets feels unseemly.
I can’t get my hands around the Weiner tweets -- and I just don’t want to.
Is is a right wing prank? It certainly seems to be. Rep. Anthony Weiner -- and I’m relieved his parents didn’t call him Peter -- is an inviting target. He’s Sen. Chuck Schumer’s former spokesman, he’s a self-righteous and often whiney liberal and, hey, his name is Weiner.
Hacking his twitter account and posting a picture of his excited namesake inside his underwear would seem a natural, one I’d applaud as juvenile fun.
But I don’t know what to make of his many non-denial denials. It’s bizarre. If he wants to keep the mini-scandal percolating along he’s doing what can only be termed a swell job (I’m not touching that one either).
I know the idiot press in D.C. is loving it because it gives them an opportunity to pretend they’re witty. Indeed they are, but only to one another.
I think the rest of America just doesn’t care one way or the other.
There’s a whole lot of people out there who have no idea what Twitter even is. So they don’t care.
Then there’s a whole lot of people out there who use smart phones and Twitter to post naughty pictures of themselves for the whole e-world to critique. So they don’t care either.
Weiner’s said his political ambition is to become mayor of New York City and this will do nothing to derail that goal.
And I think he’d be a great Gotham mayor. He’s colorful, intelligent and his heart’s in the right place even when other bodily parts of him are not.
Here’s a dozen of my recent tweets from 8days2amish:
• Time doesn't fly. It drives a Maserati down the Autobahn, oblivious to the brick strapped to the accelerator.
• If some people suffer from Irritable Bowel Syndrome then it stands to reason that those of us who do not enjoy cheerful bowels.
• The Simon & Garfunkle song "The Sound of Silence" is 3 minutes and 4 seconds of titular contradiction.
• Hawaiians complaining about high gas prices. What? Has Hawaii run out of hammocks?
• Just wondering: will the change from incandescent to compact fluorescent have any effect on light years?
• Not only is Buddy Guy a blues legend, he also has one of the greatest names in history. Who wouldn't want to be friends with a Buddy Guy?
• Older gentleman friend told me he'd be unable to meet tomorrow because of scheduled colonoscopy. "Bummer," I said and wished I hadn't.
• Avid spankers are the only people on earth whose ambition involves repeatedly hitting bottom.
• It took a while, but today I finally saw a watched pot boil.
• Rick Santorum saying John McCain doesn't understand interrogation is like saying Eskimos don't understand snow.
• I think Obama Mideast speech would have more soulful impact if delivered dressed like Nat X, the old Chris Rock character from '90s SNL.
• Maybe the Rapture did occur and there were only like five or six Christians deemed worthy of saving.
• My great dread for the future is all the kids will think it's quaint when we say, "I remember when all the TVs had just 1,000 channels."
• Rhode Island isn't even Rhode Isthmus.
• Red Sox play White Sox tonight. I'll root for neither team. I don't cheer for underwear.
• It's better to be cool than cold, yet most people strive to be hot rather than warm. It's all very mercurial.
• Spouses who fake sleep to get out of either household chores or late night sex are bulldozers.
• Butcher tried to sell me cured ham. Told him I wanted ham that'd never been sick. He looked at me like I was crazy. He must've had sick ham.
• Enjoy a relaxing Sunday! That's not a tweet, but the sentiment is twue.
Posted by Chris Rodell at 9:00 AM