Tossing the bull about bulls that toss back: The PBR 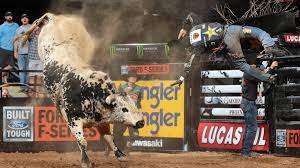 It’ll probably surprise a lot of people, but on many days I wake up wishing I had a real yah-yah job.

Yes, I dream of being a cowboy.

I think it goes back to my love for “Lonesome Dove,” John Wayne and all the great westerns.

Of course, it’s wildly romantic for a tender foot like me. I could never cut it as a cowboy.

I realized this the other day when I was sitting in a Pittsburgh saloon and the PBR came on.

Note: I was drinking Straub, not Pabst Blue Ribbon.

The PBR stands for Professional Bull Riding, the fastest growing sport in America — and for good reason. It’s very entertaining, at least for the spectators.

It can’t be much fun for the rider and certainly not bulls like the feared 1,500- pound champion named Air Time (above).

I don’t think in all my life I’ve ever seen a more agitated animal. The instant they opened the gate it was like someone had tased Air Time’s testicles.

He exploded right out of the gate. It was like watching a hooved train wreck.

The two probably don’t equate but the terminology and the stats remind me of a surly bartender who could Buck Off with the best of them.

Tell him your beer was flat and he’d tell you to Buck Off. Ask him to change the music, same thing: Buck Off.

It’s like that in “That Buckin’ Song,” a ‘98 rodeo ditty by the peerless Texas troubadour Robert Earl Keen.

I had a horse named Bad Luck
She weren’t good lookin’, but she sure could buck. Yahoo! Hey! Hey!
Yippee-Yi-Ki-Yay!

I put my Mama on her, she threw her in the air
Mama said, “Son, that’s a mother-buckin’ mare.” Yahoo! Hey! Hey!
Yippee-Yi-Ki-Yay!

The sport dates back to the 19th century. I could understand an inquisitive cowboy maybe trying to ride a bull in the hopes it would lead to increased efficiency. I just can’t see a second one ever trying it.

It’s incredibly violent. Career-ending injuries are common and death, while rare, is always a possibility.

Worse, selective breeding means the bulls are getting bigger and meaner.

Prized bull semen from a stud like one named American Heat goes for $6,750. It’s about the same price as a bottle of 1995 Domaine Leflaive Montrachet Grand Cru from the vineyards at Cote de Beaune, France.

Be careful you don’t put them on the same refrigerator shelf.

And God bless the veterinarian who spends even part of his or her day collecting bull semen. I did a little research and let me tell you, whew, it looks very dangerous and involves no roses, chocolates or other hallmarks of actual romance.

All to obtain roughly 5 millimeters “straw” of bull semen containing 4- to 5-billion prized sperm — and “bull sperm counter” is another job you never hear much about.

Besides Air Time, some of the most famous PBR bulls are named Little Yellow Jacket, Bodacious, Bushwacker, Rampage, Chicken on a Chain and The Boogerman.

Either out of historic respect or because it didn’t seem intimidating enough, I couldn’t find even one named after the Bull (last name) that killed more cowboys than any other.

He was the great Lakota warrior chief who in 1876 led the battle that decimated Gen. George Custer and the 7th Cavalry.

But the historians among you already know that.

That’s more than enough about all that today.

I wouldn’t want any readers to accuse me of spreading the bull sit.