The summer I ran away with the carnival (from '13) 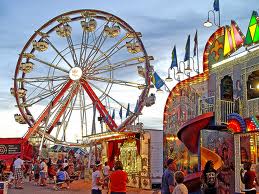 (1,058 words)
We were in the midst of the gaudy sensory overload known as the Westmoreland County Fair when my wife surprised me with a career suggestion.

She thinks I should write a book about the summer I ran away with the carnival.

I was surprised for two reasons: One, her career suggestion didn’t involve me giving up writing entirely to become a plumber; and two, I’d never really thought of it.

I guess because it seems too cliche.

How many self-involved books have there been about writers who’ve foolishly run off to chronicle war, the latest fad diet, or the loss of their precious virginity?

I’ve kind of hoped the summer of ’83 would just be one chapter in the great, big book, but not the whole book.

But, man, what a chapter.

It was all just so lurid.

We were juniors at Ohio University. My buddy Doug had a speedball game and an entrepreneurial bent. Growing up in Athens, his family had been a fixture at the annual county fair where he’d set up the speedball game and give the local hicks a chance to throw three pitches for a buck: guess the speed of your third pitch and win a crappy 25-cent batting helmet.

His experience had given him an idyllic view of the fair circuit, because that was part of the pitch he used to entice me into joining him in what wound up being a four-state swing through the upper Midwest.

He told me it was a cinch the carnivals would be filled to lots of pretty young co-eds.

That may have been the case with some bucolic carnivals, but not the ones with whom we trucked.

Our carnival was populated entirely by junkies, sexual deviates, ex-cons, and Ohio University Bobcats -- that was me and Doug and Bob.

Bob is a footnote in the story. He started out with us hoping to make his fortune selling soft pretzels. Understand, this was long before the era of the deep-fried Twinkie so don’t hold his lack of imagination against him.

Me, I stuck it out and today am delighted anytime I get a chance to shoot the bull with any junkies, sexual deviates, ex-cons or ol’ Bobcats.

There’s plenty of evidence to dispute the contention, but I think I, the underemployed blogger, turned out the better of the two.

There’s a lot of tedium involved in traveling from town to town with a gypsy carnival.

The fairs and festivals didn’t really get busting until about 6 p.m., about six hours after most of them opened.

So Doug and I would take turns sitting there baking in the sun. If I took any life skill away from that summer it is that I became an adept juggler. Doug, too.

Think about it. You’re sitting on a box with nothing to do for about 30 hours a week. You’re surrounded by baseballs. Learning to juggle was the only sensible thing to do.

That and read, of course. In fact, I believe I’m the only carny in history to have read “War and Peace” in the shadow of the Tilt-A-Whirl. My buddy back home was about to leave for the Navy and told my mother to tell me he was reading Tolstoy.

And I learned to be a pretty slick talker. You had to.

Every town had a hotshot pitcher who believed he could throw 100 mph. And maybe he could. Just not while drunk in tight jeans and cowboy boots.

It happened about once a night. They’d get right in your face and scream that the game was fixed. They didn’t care about winning the cheapo batting helmet. They just wanted the big number to impress all the hometown on-lookers.

You’d need to make a snap judgement over whether the best way to proceed was to either calm them down with logic or respond with bombastic ridicule. Guess wrong and they’d want to kill you.

I’d scream at Doug at least once a week to re-calibrate the damn radar gun so it would show that even 8-year-old girls could out-fastball Nolan Ryan, but he’d refuse.

He, too, became a conservative, albeit a warm and cheerful one.

The best part was after the shows closed. Doug and I would take our fake IDs and run to a local liquor store to score beer and booze for all-night parties behind the fun house ride we wound up calling the Wicked Witch Saloon.

And the carnies all were welcome and all would come.

We heard everything about their lives: Who was divorced, addicted, on the run, on parole and who they’d kill if only they could.

And when we were good and drunk we’d all turn loose out on the midway. I remember riding the giant sliding board -- wheee! -- at about 4 in the morning with Randall, who’d just gotten out from the Illinois state pen for a 10-year manslaughter stretch he got for killing his boss. He swore it was an accident.

I can’t believe we made it through the whole summer without anyone trying to rob or kill us, especially Doug, the pretty one.

I’m coy, of course, out of respect for her feelings. She suspects there were more and -- hallelujah -- she is right.

But really there weren’t that many. Carnies, even ones who can boast they’ll soon be successful newspaper men who’ve read Leo Tolstoy, bear an indelible stigma.

It was a difficult pedigree for available young single women to overcome. As for those who managed, well, bless their hearts.

So maybe one day I will write a book. It’s a dear and rich part of my past.

Today, you’ll just have to settle for a blog.

And that there’s just one more example of carny economics.

The splendid folly of life’s roadtrips