Singing a song of praise for Mark Slagle Construction 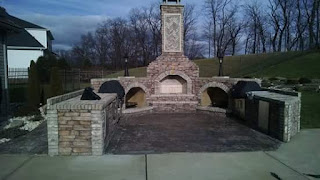 It was one of the sweetest compliments I've ever heard because it was so unexpected and came from such an unlikely source.

My contractor said I have a lovely voice.

So let me return the favor.

Let’s start with something basic: I never once in the last month thought, “Well, that does it. I’m gonna have to murder Mark.”

Some people just bug the crap out of you.

Not Mark. He’s been my near constant companion for 25 of the last 30 days, all of which included at least three hours of daily commute. The scenario holds a lot possibility for awkward conversation.

There wasn’t even a second of that.

The clock was ticking last month on Mom’s move. We had a place for her here in Latrobe and we needed to move her, all her stuff, then completely rehab her South Hills condo in preparation for sale. The longer it took the more it would be costing me in duplicate housing fees.

Simple competence was what I thought I had with the first guy. He’d been recommended by the building managers.

He will not be recommended by me. He took money for work he didn’t finish and three times left me in a lurch by blowing off scheduled meetings that involved me driving from Latrobe to Pittsburgh.

So I was feeling distraught when I asked Mark if he could bail me out. He’d just re-did our bathroom and took something shabby and made it beautiful.

But did he have time for me, the move and subsequent fix-up?

He swept in and took over. It was a huge relief to have someone I trusted come in and lay out a plan iand mmediately begin to expertly attack it.

I shouldn’t have been surprised because Mark is brilliant, a word I do not use lightly or at all facetiously.

The guy has a college degree.

Not many contractors do — and that’s not a slight against contractors, many of whom have tremendous common sense and mental agility that gets things done.

Some of them even have college degrees.

But unlike Mark, few of their’s are in applied physics.

During one of our drives home late at night he explained Einstein’s Theory of Relativity to me.

He’s one of those guys who is so informed and conversant about so much I find myself becoming uncommonly quiet just to reduce the odds I’ll say something stupid.

He’s one of the best-read men or women I’ve ever known. We met at the Tin Lizzy and I became a fan right away when he began verbatim quoting to me the opening paragraph of Vonnegut’s “Dead Eye Dick.” He’s familiar with all the classics and one night showed up with his old copies of three of the more obscure F. Scott Fitzgeralds for me to absorb.

His opinion of “Last Baby Boomer?” He read it and said, “It’s terrific! You’ve written the great American novel!”

How could I not love that?

I appreciated, too, that he never once belittled me for being slow and incompetent at my menial tasks like taping walls for paint prep. It’s a common cheap shot many in his position relish.

In particular, I admired his refusal to deem any common obstacle a problem. No, with Mark, they’re all “monkeys,” an appellation that turns difficulties into something playful that can be overcome or tamed to do our bidding.

When the paint I’d put on the kitchen cabinets began their unsightly drip, he’d say, “We’ll just let those little monkeys dry and then sand ‘em on down. It’ll look great.”

He swears loudly and profusely at least once an hour, usually out of pain from some occupational hazard. I decided early on I’d only render assistance if I heard the power tools stop.

They never did. He is a marvel of efficiency in motion and pain tolerance.

I only once saw him FOFO, a term I learned last summer from a New River raft guide who said FOFO happens when someone is feeling overwhelmed.

FOFO stands for “Full On Freak Out.”

Mark FOFOd during the home stretch. He was working on tightening a monkey of a shower faucet when the handheld shower head began spraying him right in the face with scalding water.

I heard the torrent of profanities and imagined flocks of a birds scattering from Acacia tree canopies all across the African savanna.

It was very funny.

It was at the end of a long day and Mark, fatigued, said, “Let’s go get a bite to eat and come back and finish. I’ll be fine then.”

And he was. Right after a dinner that included two draft beers, two shots of Cuervo Gold, a Chardonnay and an Irish whiskey. And those were all his!

On the unwinding drives home we would sing. I suspect this doesn’t happen with many contractors, but then many contractors haven’t soloed on the stage at Carnegie Hall in NYC, which Mark did with a choral group from the University of Maine, where he was truly educated.

He’s truly one of the most interesting men I’ve ever met and I’m proud he’s my friend.

For me, his work added thousands of dollars in value to the property. He redid the floor and made improvements in plumbing, appliances, fixtures, cabinets, dry wall, etc.

Really, hiring him to do things like paint walls is like hiring Yo-Yo Ma to play your kid’s bar mitzvah. It’s a squandering of immense talent.

I hope one day to splurge and have him do some lavish masonry project like the one he did in the above picture. He’s a master.

So consider this my warmest recommendation for you to hire Mark Slagle.

It’s just me taking a moment to sing my friend’s praises.

Pitch perfect and on key.