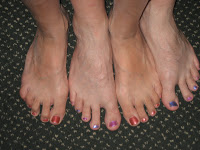 At the onset, it sounded like a prelude to a mind-searing image I’d never be able to self-lobotomize off my brain.

It was about 20 years ago. We were at a family function with my parents and all  my cousins. It was all fun, light and free of controversy.

Sweet, too, because my parents began talking about how they’d grown closer as they’d aged, that their affections were becoming more evident.

This was surprising to me because they’d for years slept in separate rooms and the only evidence I’d ever seen they’d ever been intimate was the mortal existence of my brother and I.

As if to prove what she was saying, Mom, wine in hand, told how she reacted after my father had returned home from a long golf vacation. She’d really missed him, she said.

“So when he got home, I sat him down in his favorite chair, told him to lean back …”

Oh, how my skin began to crawl.

My fears of having all my innocence corrupted were unfounded.

I remember the old man looking around the room with a satisfied smile on his face like the one he’d seen on Frank Sinatra after he’d gotten back from a night with Ava Gardner.

He was the man.

I didn’t realize it at the time, but he was the man.

I’d have to be prone for months in a full-body cast to ever even ask my wife if she’d maybe for purely hygienic reasons trim my toenails.

It feels so dirty, like something I should hire a hooker to do.

I thought about this the other day after a friend of mine told me his wife was getting a local pedicure when an unusual customer sat down in the chair right next to hers.

I’ll be interviewing him in about an hour. I’m still unsure whether or not I’ll ask him to show me his toes.

A lot of people have been wondering about The King’s health. He’ll be 87 on September 10 and he’s been cutting back on his appearances. His office turned down a deluge of interview requests in June when the U.S. Open was held at nearby Oakmont.

So I’m very pleased Kingdom magazine asked me to interview him. It’s always a lot of grand fun.

We talk about golf history, presidents with whom he’s been chummy and other relevant topics.

But we always enjoy a good banter about pointless stuff.

Really, I could spend an hour asking Palmer about his toes.

When was the last time he cut his own toenails? Has he ever fallen over trying to groom the hard-to-reach pinkie toe? Has he ever had them painted the shade of a ripe plum? And, perhaps most important, does he have any ardent fans who’d volunteer — or pay even — to cut The King’s toes?

My old friend Joe — he’s 76, looks 58 and acts 22 — got sort of misty when he heard Palmer paid for pedicures. Joe, unlike Palmer, is on a fixed income.

“Oh, how I dread cutting my toenails. I have to get down and roll around on the floor. It’s terrible.”

I know he and a lot of other seniors if they had the disposable income would make a twice-monthly trip to get pedicures.

I had one once. It was wonderful. I wrote about it. The story ran in a couple of newspapers and got such a warm reaction I included it verbatim in my “Crayons!” book.

The picture above is the result. Try and guess which feet are mine and which are Val’s!

I’ve long wondered why the pharmaceutical industry — famous as they are for trying to make things grow (hair, stamina, penises) — hasn’t realized the tremendous market there is for making some things stop growing.

Imagine a pill that would halt further growth of your toenails. It’d be wonderful.

Instead of interviewing Palmer, I think I’m going to offer to trim his toenails. I’ll bet I could sell the authenticated clippings on eBay.

Someone’s bound to pay a fortune for AP’s toenails.

Then maybe I could afford to have someone trim mine for me.