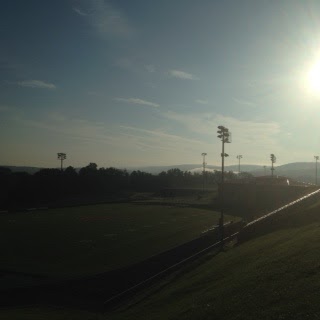 The Olympics will be more satisfying when each event includes a participating representative from the core viewing demographic.

I came to this conclusion after basking in the greatness of Trayvon Bromell.

Wrong. He was just 0.25 seconds behind the glorious Usain Bolt.

And Bromell was last.

It would add useful perspective if every race in every event included someone from the target audience, some beer-bellied, under-motivated middle-aged cigar-smoking lout.

This, of course, is a moot point because the car sometimes stubbornly doesn’t move even an inch. It’s just beat to hell.

Really, I was worried the only way I could run a complete 100 meters was if someone sicced a big mean dog on me. Plus, I was fearful I might pull a muscle, trip, get distracted by a butterfly or I might start feeling like I was some kind of idiot.

The latter fear stemming from an insinuation by my 10-year-old daughter who hinted I was acting like I was some kind of idiot.

I’d asked her if she wanted to be my official timekeeper.

“Why would I want to do that?” she asked.

Because, I said, it might be historic. You might get to see your old man set a new world record.

She rolled her eyes in wild exasperation, a move she learned from her mama.

“You’re not going to set any records!”

How did she know? I’ve never tried to run 100 meters before. What if sprinting was the prodigal talent that’s been evading me my entire life?

“53-year-old blogger beats Bolt!” would be a great story, one that would give the whole grumpy world a giddy lift.

There’d be skeptics, sure. But I’d have had a witness. Lucy’s honest as all get out.

So I was out there at the Greater Latrobe High School track all by myself at dawn (above).

Bolt’s been training since he was 10.

I took one stroll around the track.

I also differed from your typical Olympic sprinter in our respective starting positions.

I stood there upright like I was waiting for a bus. I realized I may have sacrificed some time, but I was fearful if I bent over I might not get back up.

I have to say I was pretty good. Running fast is very fun for human beings of any age.

I’ll link below about the last time I did it. The incentive then was a round of free drinks from my Point Park University students.

The incentive today was much greater: international and eternal sporting glory!

I didn’t pull any muscles, trip or give up. In fact, I kicked through the finish line.

On my way up the hill, sweaty and out of breath, I coincidentally saw Lucy’s elementary school librarian.

And she saw me!

It added useful credence to my story when I went home and told a disbelieving Lucy I’d run the 100 meter dash in 9.57 seconds.

I may have finished the 100 meter dash, but I gave up being honest about 50 years ago.

Despite disparities in our fame and net worth, I stubbornly believe it’s still better to be quick on your feet than swift in your shoes.