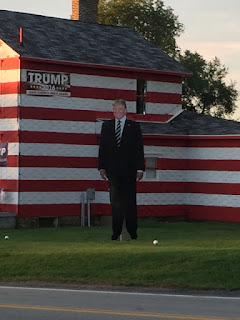 They hired a security dude to make sure nobody vandalizes the 20-foot likeness of him at what is known as the Trump House right here in Youngstown, Pa.

It’s a wee bit late. Somebody last week drilled a BB about a foot from the smiling Trump crotch, what I imagine was the intended bullseye.

The unassuming two-story house became Trump House in April when property owner Leslie Rossi, who might be a more avid Trump supporter than even Melania, had the structure painted to resemble the American flag.

I liked it. Who wouldn’t?

I mean besides Colin Kaepernick.

But the giant Trump is controversial, as is Leslie, with whom I am casual Facebook friends.

She is, of course, beloved by Trump supporters here and from coast-to-coast. She and her creation have been featured by CNN and in The Washington Post and the Los Angeles Times, among numerous other media. And the house is a full-fledged tourist attraction with people from all over stopping to meet Leslie and pose for pictures.

And the family is renown for their generosity. There’s a reason the still-new $9 million Greater Latrobe High School athletic complex is named Rossi Field.

But Leslie’s effective because in addition to a lot of money, she also has a lot of moxie. She gets things done.

I’m now reminded of that about three or four times each and every day when I drive by the Trump House.

Friends of mine who have a hunch as to my political leanings — go ahead, take a wild guess — ask if I find daily seeing the giant Trump repellent.

Not at all, I say. In fact, I much prefer it to the naked Trump statue the subversives have been inflicting on unsuspecting cities.

But more and more I find myself wishing if we had to have an outsider reality TV host run for president, why couldn’t it have been Jeff Probst?

Or maybe the late Fred Rogers.

It’s a supreme irony that Trump has taken over Youngstown, the tiny village that gave the world both Rogers and Arnold Palmer, two men renown for decency, tolerance and a soulful warmth so bubbly they seem carbonated.

It’s interesting, too, that one of the few yards in town that doesn’t have big Trump signs out front is the one that belongs to the only man in town who actually knows Trump personally.

That’d be Palmer. Trump’s been to Youngstown several times to golf and express his admiration for Palmer. But if Palmer, a long-time GOP stalwart who in the ’60s was urged to run for the office Trump now seeks, is supporting Trump he’s keeping it to himself.

For the record: I’ve for years told anyone who wonders that Ken Starr and the Clinton impeachment trial turned me from a moderate into a knee-jerk liberal whose knee jerks most liberally whenever it’s in the vicinity of a conservative’s crotch.

But the rise of Trump has convinced me I’m not a liberal after all.

In fact, I now claim membership in a group that likely would rather not associate with one as uncouth as I.

I am an elitist.

I believe in manners, education, history, tolerance and having chummy foreign allies in good times and bad. I believe in diversity, diplomacy, optimism, compassion and extending the benefit of the doubt to those with whom I disagree. I believe in civility and that a real man’s hair should be composed entirely of real hair.

And because I believe most Americans believe like I do, I believe we’re about to witness an historic landslide in 70 days.

I will say this in Trump’s favor as someone who sees so for himself up close at least once a day: Trump’s hands are truly huge, the size of cafeteria toasters.

I only wish his humanity were as big as his hands.

Thank you :) from the the real Mister Rogers' Neighborhood.

I'm both flattered and intrigued, my anonymous friend. Thank you!