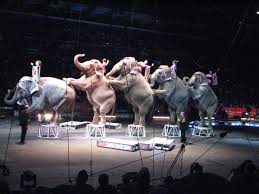 This weekend I’ll be going to the Ringling Brothers and Barnum & Bailey Circus with my littlest buddy.
I imagine in a few years I’ll be going with my biggest.
I’ll get to that.
Growing up, the circus was never on our radar. Sure, we did a lot of fun family stuff, but never once did my old man say, “Guess what, kids? The circus is coming to town … and we’re all going!”
I don’t know why. It’s always been affordable family fun and I know my father didn’t have any trendy squeamishness about animal mistreatment. Back then no one did.
In fact, the phrase “seeing the elephant” once bestowed worldly bona fides to simple rubes and bonehead hicks.
Like us!
The “see the elephant” phrase was even used by Civil War soldiers to describe those who’d been in combat.
Seeing the elephant meant you were experienced.
“Seeing the elephant” was truly a bucket-list experience.
Today, I think I’d modify it to “seeing the elephant poop.”
Tell anyone you’re going to the circus and aficionados will invariably share their story about what it was like to see one of these great beasts unloose during the middle of a performance.
It was something me and my daughters experienced in 2012 and about which I wrote the vividly detailed essay linked below.
My daughters still talk with wonder about the episode and the elephant we spontaneously named Dumpo.
The news that animal rights groups have succeeded in pressuring Ringling into dropping the elephant act beginning in 2018 fills me with mixed emotions.
I like to the think these behemoths are well-cared for and enjoy their human interactions. They certainly seem cheerful and possessed of above-average intelligence.
But I understand the argument it’s unnatural for elephants to perform stunts for cheering humans.
We think.
I mean maybe when they’re sure no one in the savannah’s watching, they roll out sturdy platforms and practice balancing their butts on them.
And I believe there are many African tribesmen who, thanks to Ringling, are overjoyed they no longer worry about strolling barefoot through the bush and inadvertently stepping in a 3-foot high pile of warm elephant dung.
Mt. Lebanon, the Pittsburgh suburb where I was raised, is in the news for having a deer control problem. Animal lovers say the gentle creatures bring rustic charm to the sylvan neighborhoods.
But they’re a real nuisance. They eat the shrubs and cause lots of expensive vehicular damage when they collide with Lebo vehicles.
Think of what it would be like if instead of deer, Mt. Lebanon were overrun with wild elephant.
It’s my understanding that for their own good, Ringling will permanently relocate the retiring elephant performers to spacious Florida enclosures where they’ll live out their lives in peace.
It sounds to me sort of like what the federal government did to the Native American populations in the late 19th century.
Who knows?
Maybe one day the elephants will decide to open a casino.
Of course, none of that’s of interest this weekend to my darling little Lucy. She’s thrilled to be going to the circus with her Daddy. And, boy, is her Daddy thrilled.
He loves the circus.
So does Paul!
I’ve logged more giddy bar time with Paul than anyone on the planet. And that’s saying something. Plus, we’ve been to maybe a thousand sporting events together.
We’re tight.
But it wasn’t until a few years ago we both discovered another latent kinship.
Both our parent were neglectful in taking us to enjoy the circus.
Then a few years later we independently decided to give it a shot. He took his grandkids and I took my daughters. Later that week we shared our revelation.
The circus was truly the greatest show on earth!
So now we go every year, but never on the same days.
I foresee one day soon when that’ll change. The kids will be busy and he and I will will partner up and go see the circus.
Oh, and what a day it’ll be!
We’ll combine elements of all our favorite pastimes.
We’ll sit there and sip our beers, gape with wonder at the amazing acts and just enjoy a really good, long giggle.
Kids from all over will tell parents how much they enjoyed the circus, especially the two lumbering beasts that seemed so cheerful and possessing of above-average intelligence.
They’ll feel worldly when they tell their parents, indeed, they’d seen the elephants.
That’s when their moms will tell them Ringling doesn’t have elephants anymore.
“That must have been Paul and Chris.”

Related . . .
Ringling poop shoveler steals the show
Kate Upton in Latrobe: Seeing the elephant
Hooray for Humbug, USA!
Weddings, friendships and a pooka named Paul
The summer I ran away with the carnival