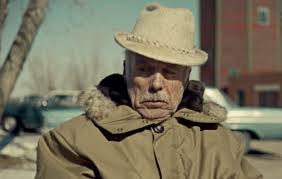 My wife and I were enjoying “Fargo,” (season 2 on FX) when she responded to an observation of mine with a nasty slur on both professional actors and the elderly we both aspire to one day be.
First off:
Spoiler Alert!
I thrill to be writing “Spoiler Alert!” so early in the morning. It makes me feel like one of our critical big shots, like I’m making readers tingle with either dread or anticipation.
We love “Fargo.” The first season I resisted because it started out so over-the-top violent I was repulsed. I told Val to change the channel.
She did.
She turned on the local news.
I told her to turn back to “Fargo.”
So we hung in there and it was very compelling, especially Billy Bob Thornton who played one of the most Satanically competent criminals in TV history. We recommend it.
Of course, we were jazzed when season 2 premiered Oct. 12. Each season is its own set piece; you don’t need to watch one to enjoy the other.
This season’s about two Midwest crime families and their eagerness to murder one another and make simple one-syllable words like “yes” sound like they’re pronounced “yahhah.”
This one stars Jean Smart, Jesse Plemons (Jesse from “Breaking Bad”), Patrick Wilson, Kirsten Dunst and, one of my favorites, Ted Danson.
It also stars the here-to-fore unknown to us Canadian actor Michael Hogan, 66, as the Gephardt family patriarch, Otto.
It was about him that Val became controversial.
Because (here’s the spoiler) in the first episode he suffers a stroke that leaves him paralyzed and unable to talk.
So the show wraps up and I say to Val, gee, how would you like to be that guy. He gets a role on this big show. He reads the script and it says he’s the family honcho. He thinks he’s going to be like Brando in “Godfather.”
Then in the very first episode he suffers a stroke and it looks like he’s not going to say a peep the rest of the season.
So far, that’s true. He sits there motionless in his wheelchair through entire scenes. He’s like a seated mannequin only with subtle eye movements.
In fact, in one scene his two henchman get their guts blown out all over him and he barely blinks. He doesn’t even drool.
For an acting pro, I say, it must be a real letdown.
That’s when my usually PC wife says, “Well, he’s old. He’s probably just happy to sit there while all the others do all the real work.”
Really?
Hogan’s only 66. That’s three years younger than Trump.
I considered asking how she’d like it Trump just sat around without ever even opening up his mouth, but realized the potential would diminish my argument.
But what if she’s correct?
What if today’s actors prefer roles that require them to barely act?
Kevin Costner played a dead body in 1983’s “Big Chill.” He’d filmed flashback scenes that were cut. But Costner is visible as the coffin body being dressed in the early scenes.
Costner doesn’t act like a lifeless body again until 1996’s “The Postman.”
I remember once reading the debatable decline in Hollywood can be measured in the weight of scripts.
Scripts weigh half of what they used to. For example, a Hollywood heyday script chock full of crackling dialogue — think, “Casablanca” (1942) — used to weigh about 3 pounds.
By comparison, I just saw “Black Mass,” the Whitey Bulger story starring Johnny Depp. It was very good. But that script probably weighed less than a really big spider.
There’s just not much dialogue.
In fact, it’s likely Humphrey Bogart probably says more dialogue in “Casablanca” than surly Sean Penn’s said in his entire miserable career.
Maybe Val’s right.
Maybe actors don’t want to go to the trouble of learning dialogue when it’s easier just to appear glum or moody for 120 interminable minutes.
It’s hard for me to sympathize.
If anyone thinks memorizing words is difficult, they ought to try typing them.
I have to quit now.
I’m just exhausted.

Related . . .
Let’s all America go to the movies!
R.I.P. James Gandolfini
“Breaking Bad” vs. “The Sopranos;” and the winner is …
Roger Ebert movie “Life Itself” about more than movies; it’s about life itself
My advice to tomorrow’s critics
How real men (like me & Michael Keaton) shake hands