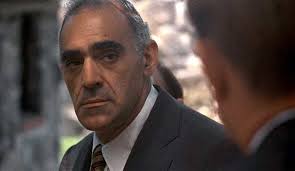 “The Godfather” was on AMC ‘round the clock yesterday and you know what that means.
I’d check the internet every 10 minutes to see if Abe Vigoda was still alive.
In the movie — spoiler alert! — he gets offed for playing mob footsie with Don Barzini and Philip Tataglia.
In real life, Vigoda will, it seems, never die, despite persistent reports that he is, in fact, already dead.
The first of these happened in 1982 when People magazine referred to him as “the late actor Abe Vigoda.”
He took the declaration of his demise in good, er, spirits and posed for a life-affirming picture of himself sitting upright in a coffin reading a copy of the erroneous People issue.
David Letterman in ’97 held a seance for the ghost of Vigoda that ended with the still-living actor ambling on stage to berate the host with, “I’m not dead yet, you pinhead!”
Subsequent Vigoda death rumors sprang up again in ’98, ’04, ’07, ’09 and again last year.
I feel like starting an Abe Vigoda is alive rumor.
I think the reason he’s so frequently rumored to be dead is because he was born with such an ancient face.
Check him out next time “The Godfather” is on which, given what I know about AMC programming, should be right around lunch today.
As Tessio, he looks 94. When the ’72 movie was released he was, in fact, 52.
My age!
The difference is I always look roughly my age. I looked about 40 when I was 40, 20 when I was 20, etc.
Vigoda seems like he came into the world looking 90. Born in Brooklyn in 1921 (he’ll be 95 February 24), I imagine he was getting served in taverns without being carded in 1926.
It’s like there are no visual records of him looking young.
He’s the facial doppelganger of supermodel Christie Brinkley, 61, whose lovely appearance hasn’t changed in 40 years.
Unfortunately, neither has Vigoda’s.
It’s like the acting Abraham could have been contemporaries with the Biblical one.
Usually, you see someone like Vigoda in some obscure role prior to their finding fame. They’re giving it their best as a struggling sodbuster in an old “Gunsmoke,” or a luckless bartender in some vintage “Twilight Zone.”
Not Vigoda. It’s like he emerged fully formed in 1972.
I saw him in an old “Hawaii Five-O” playing some Italian mob boss’s crafty henchman. But that episode appeared in 1974, two years after Vigoda became famous playing some Italian mob boss’s crafty henchman.
Clearly the guy’s a great actor. Any Jewish gentleman who can consistently appear to be an Italian tough guy while giving off a decidedly geriatric vibe has got some chops.
But his IMDb credits lists only six minor roles from 1949 to being cast in “Godfather,” which itself is stunning.
It’s like he went from some Hoosier high school to the New York Yankees without the requisite stint in Scranton.
What was he doing from 1949-72? Did he ever think of giving up his acting ambitions?
Did he ever sit around staring in the unforgiving mirror and thinking, “My big break better come soon. I’m not going to be this young and pretty forever.”
He’s just so enigmatic to me.
He’s worked steadily, if modestly since “Godfather.” Who can forget his memorable stint with the still-funny "Barney Miller?"

He set sail on “Love Boat” three times; got roughed up by “The Bionic Woman;” and played an elderly grandpa on “B.J. and The Bear.” The work’s continued through the ‘90s when he played Zeus on a production called “Farticus,” which has now zoomed to prominence on my viewing bucket list.
His persistent existence makes me wish I was still doing the occasional “Where Are They Now?” feature on B-list celebs for National Enquirer.
I remember doing ones on Harry Morgan, Elinor Donahue, Al Molinaro, and I think about three or four of the forgotten kids who’d appeared on “The Waltons.”
The stories were always fun because the stars were uniformly grateful for the attention and the opportunity to let their fans know they were still around.
It would be fun to do that for Vigoda, to let people know he’s still with us and still doing well.
At least I think that’s the case.
It’s been 10 minutes since I last checked.