Vegans vs. meatlovers at Thanksgiving 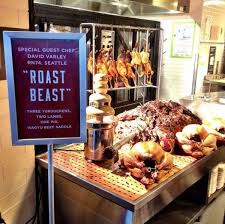 I admire vegetarians and understand what motivates them but there’s about as much chance of me becoming one as there is of me resuming my virginity.
It just ain’t going to happen.
My wife’s always threatening to become a vegetarian — as threatening as any animal-loving pacifist can be about differing morals.
She aspires to be like Lisa Simpson, who once told Homer her goal was to never eat anything that cast a shadow.
Sure, it’s a goal you really “root” for. But is it attainable?
For some, maybe.
Like many who struggle with avoiding meat, steak is Val’s Achille’s heel. She finds a good, juicy steak irresistible.
And the meat-lover in me wonders how Achille’s heel would taste if it were slathered in BBQ sauce and slow-roasted.
I’m one of those guys who believes ham radios would be more popular if ham radios were made entirely out of ham.
I recently saw a news story that said an embarrassing number of devoted vegetarians admit to consuming meat when they’re drunk and no one’s watching.
They experience shame. They’re doing something they know that will lead to ridicule. They don’t want anyone to know what they’re doing.
I know exactly how they feel. I used to feel the same way about a clandestine activity.
Then one day I realized nobody really cared and today I just blog whenever the hell I feel like it.
I understand there is across the nation lots of tension at some family dinner tables between meat lovers and vegans who resent literally people trying to shove flesh down their throats.
It shouldn’t be that way. There should be understanding. It should be live and let live.
Except for the bird.
It’s got to go.
I just love the Thanksgiving meal and it wouldn’t be the same without turkey. And don’t forget the leftovers. We waste nothing and, guaranteed, on Saturday I’ll be using the picked over carcass to make my annual turkey gumbo.
But our traditions are mostly modest.
I think the thing that’s upsetting our vegan friends most — and I’m with them on this — is that what used to be about giving humble thanks is now about pure gluttony.
Thanksgiving today is to giving thanks what Roman Emperor Caligula was to tasteful party hosting.
It’s often repugnant.
I blame John Madden and the turducken.
The old Oakland Raider coach and long-time CBS broadcaster used to always do the traditional Thanksgiving Day NFL game. I remember the corpulent coach waxing euphoric on the gastronomic Frankenstein involving stuffing a deboned chicken into a deboned duck into a deboned turkey.
Then, of course, stuffing the entire unholy creation inside a human rib cage.
I remember hearing Maddon’s drool practically puddling beneath the microphone.
It sounded simultaneously repulsive and delicious.
It’s led inevitably to the dubious appearance of what some are calling “The Roast Beast:” three turduckens, two lambs, one pig all stuffed inside a Wagyu beef saddle.
You hear that and you just know some deviant chef is making his plans to next year get his or her hands on a black market Giant Panda to one-up his colleagues.
Combined with the inevitable Black Friday shopper riots, it’s just become too much, one of those rare occasions when the tasty is being lapped by the tasteless.
Maybe this year we can begin to scale back, to make Thanksgiving less about consumption.
Maybe by making Thanksgiving more meager we can make it for the first time more meaningful.
Like a virgin!
Or at least like a pilgrim.

Related . . .
Friendship, The Boss & Thanksgiving drunk dialing
Talkin’ Turkey (The Republic of) on Thanksgiving
The true tale of the Pilgrim turkey rapist
A Happy Sprawlidays Survival Guide
Is beer-fed turkey for the birds?