I have the hots for angry traffic flag girl 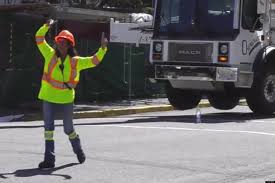 I’m having mixed emotions about the pending completion of a pivotal bridge re-construction project. Sure, the resumption of normal traffic will be welcome.
But it will come at a cost.
I’ll miss micro-flirting with my angry flag girl.
The bridge between my home here in Youngstown and all the stuff I need to do in Latrobe has been under construction since about April. Crews have been toiling to repair the gateway State Route 982 bridge over U.S. Route 30.
PennDOT considers it enough of a landmark they’ve opted to pay the extra dough to inscribe the bridge siding with tributes to native sons Fred Rogers and Arnold Palmer.
One side says, “It’s A Beautiful Day in the Neighborhood;” the other, “A Greater Latrobe Area Legend • Arnold Palmer.”
So it’ll be an inviting target for high school vandals eager to spray paint helpful messages about which local girls are easy.
I’m sure the angry blonde flag girl won’t like that one bit — and not just because I suspect she was once easy in high school.
She’s a dirty blonde. More dirt than blonde. I’ve never seen her without a cigarette and a scowl.
She looks like someone who either loves to drink or just crawls out of bed each day looking naturally hungover.
I sense she hates her job and will murder anyone who dares change lanes without her approval, something no motorist in their right mind would do. She’s too scary to defy.
But there’s something about an angry looking woman waving a traffic flag and telling me just where to go I find irresistible.
I wonder if it’s because my sweet, darling wife — the Lutheran church organist — is her exact opposite in every way.
Val plays “Just a Closer Walk With Thee.”
The traffic babe snaps her flag motioning me it’s my turn to proceed.
I imagine her idea of safe sex is when she leaves the day-glo vest on.
And nothing else.
Maybe she’s one of those people who after 8 hours out there on the hot pavement has trouble even in intimate situations switching off. She must be bossy in bed.
“Okay, move forward. Slowly. Slowly. Now turn to the left. A little more. There. Good. Now keep your eyes on me. I’m about to give you the signal. Not yet. Not yet. Okay . . . now! Go! Go! Faster! Faster! You’re drifting out of your lane!”
I close my eyes and in my mind hear her flag snapping like a whip over and over.
I imagine she keeps a stack of traffic pylons in her bedroom to maintain that feeling of control she exercises all day.
I wonder if she likes her job.
Does she hate her co-workers? Is she miserable? Is her home life a mess?
Sure, I wonder these same things about the men who do the same job.
I just never imagine what they look like naked.
I once did a story for Maxim about men who married toll booth attendants. They’d fallen in love with and successfully courted women 5-10 seconds at a time over a period of years.
I wonder if that’s what she dreams will happen to her as many of the same cars pass by.
She could be waiting for her knight in shining armor.
But probably not a blogger in a cedar green 2007 Saturn Vue.
She’s never once acknowledged me ever after all the times I’ve made eye contact and mouthed “thank you!” for not directing me over the bridge edge to certain death.
And now as of today, she’ll be forever gone from my life.
She’ll have taken her little red flag to some other desolate stretch of highway, perhaps to charm other strangers who have trouble explaining an odd attraction to something so mean looking.
Don't worry about me. I’ll be fine, I’m sure.
I imagine right about now Val’s in a mood to tell me just where I can go.