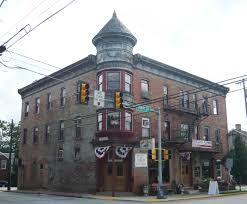 Youngstown, remember, is the one-stoplight town just outside of Latrobe. Before moving up the mountain, Val and I lived just 1/4 mile from the Tin Lizzy from 1992 through 2007. It’s a great town and, in fact, is the birthplace and home of Arnold Palmer and summer residence of Fred Rogers.

I was very pleased when my friend, Buck, offered me the space. He’s been running the building for, I think, 35 years. He’s gone way out of his way to make me feel welcome, as have his staff.