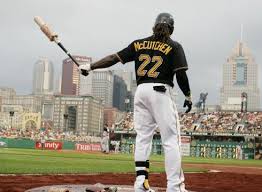 My daughters, 14 and 9, know I live and die with the fortunes of the Pittsburgh Pirates and are sympathetic. We as a family enjoy baseball to varying degrees and they understand I’m in a sunnier mood when the Bucs win.

So they were apprehensive Sunday morning when I solemnly told them to gather in front of the TV.

They knew the game ended late and I’d recorded the ending.

“I’ve told you before how no game like baseball can break your heart,” I said gravely. “You think you’re going to win and then something can happen at the very last second that will cause you to lose in profoundly painful ways that will leave you scarred for life.

“One of those things happened in the Pirates game with the Cardinals last night. Watch this.”

I pushed play and Pirate superstar Andrew McCutcheon came to life. It was the bottom of the 14th inning. They’d come back twice before, but now were down 4-3 with two outs and a runner on first.

We were down to our last strike in a game that had pivotal repercussions for the rest of the season between the teams with the two best records in the National League.

McCutcheon sent a fastball deep into centerfield. The girls stared rapt as the ball sailed over the fence. On TV, the Pirate fans erupted. It was pandemonium, the biggest win of this so far glorious season.

“If you’re a Cardinals fan!”

I then did the kind of living room dance that will forever remind them that there are large strands of big, jolly jackass embedded in their DNA

The exact same scenario played out again today! And I did the whole goofy morality play all over..

The Pirates beat the Cards in another walk-off win. It was remarkable.

The consecutive stunners left me pondering at which point in the baseball season I hope I die.

Because at some point in our collective futures, it’s going to dawn on us that death is near.

At some point, it’s likely a doctor is going to say to me, “Your reckless lifestyle means you’ve only got four months to live.”

If that happens today, man, I’m going to be really pissed.

Because if I die four months from today, it’ll happen about first pitch for Game 1 of the 2015 World Series.

A lot can still happen, but there’s a happy chance the Bucs will appear in their first World Series since 1979. I could miss it.

That would really kill me.

Ideally, I’ll die on day the bank notifies me I’ve bounced a really big check. Or when the five-day forecast just sucks, which, lately, is about every day here in Western Pennsylvania since, oh, November 1975.

I’m a generally optimistic guy who always has something to look forward to on the calendar.

The mindset keeps me going.

I wouldn’t want to die the weekend before a new Muppet movie premiers. I love the Muppets and would hate to miss one of their films.

I always think anytime I get on a plane that there’s a chance I’ll die and I always hope at least it’ll be on the way home. I don’t travel much for business so if I fly I’m flying for fun. I wouldn’t mind dying nearly as much knowing it was on the way home after I’d had a really good time.

Plus, wrecking on the way home would mean neither Val nor I would have to do about 20 pounds of dirty laundry and that’s a plus.

I hope I do not die before the year 2019 because I plan on spending a lot of that year saying the year 2020 is bound to be a great year for visionaries. That cracks me up.

I guess I wouldn’t mind dying before the Iowa primaries in any presidential election cycle. People are so insane about politics and mass insanity depresses me.

I’d hate to go to either hell or heaven in a really bad mood. First impressions matter.

Of course, this is all wild speculation.

I’m one of those Pirate fans who lived through the soul-searing heartbreak of Oct. 14, 1992. That’s when the Atlanta Braves beat the Pirates on Sid Bream’s walk-off slide in Game 7 of the NLCS.

It was the most devastating loss in all my years.

If that didn’t kill me, nothing will.

Time for the Bucs to bury Vince Lascheid

The Pittsburgh Pirates & The KKK (not those ones)