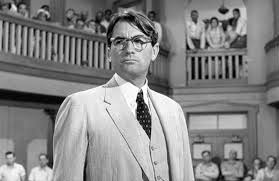 I’ve had a number of people ask me if I’m going to read Harper Lee’s newly released 1957 novel “Go Set a Watchman.”

Reading belatedly that Atticus Finch hates blacks would have the same effect on me as watching a newly released “Lone Ranger” program and seeing the Masked Man say his horse Silver sucks.

Lee, 89, is now the author of books that will be remembered for defining two American epochs.

“To Kill a Mockingbird,” published in 1960, is the story of how one strong man can make a difference in a town crushed by racial hatreds.

“Go Set a Watchman,” published this month, is ostensibly the story of Scout’s return to Macomb to find the father consorting with Klansmen and bereft of the moral honor she so idealized.

In fact, “Go Set a Watchman,” is a tale of how greed and slimy corporate manipulation can supersede the wishes of a once-vital 89-year-old woman to manufacture a phony literary event in order to enrich Rupert Murdoch.

If Harper Lee had wanted “Go Set a Watchman” published, she’d have done it decades before she wound up in a nursing home with a security guard at her door charged with admitting only those on the pre-approved “trusted” list.

She’d have taken steps to do so while her caretaker sister was still alive, not suspiciously two months after she’d died.

She’d have done it, surely, before she became wheelchair-bound, partially deaf and blind and suffering from acute memory loss.

And here I’ve always thought the publishing industry was only ruthlessly cruel to those of us who hadn’t published one of America’s greatest novels.

Will HarperCollins exhume Twain’s corpse, squirt it with perfume, and prop it up for a Times Square book signing?

“To Kill a Mockingbird” has been a beloved novel for most Americans for more than 50 years.

It’s been that way for me for two.

The admission, I understand, makes me a bit a literary Lilliputian. But I just skipped that assignment and never picked it up.

In fact, you could say I inadvertently came to Harper Lee through Alistair MacLean.

As literary titans go he’s not in Lee’s class, but he was pivotal to my early love of books. MacLean was the old WWII Royal Navy torpedo man who wrote the stories that thrilled my youth.

Anyone remember these titles?

Many of these were made into blockbuster movies. Clint Eastwood’s role in “Where Eagles Dare” remains his highest body count.

Then there is maybe the best of them all, “The Guns of Navarone,” starring the peerless Gregory Peck.

To this day if I see it on, I’ll record it just so I can see Peck brandish a pistol and shout at pasty David Niven, “Now, you’ve got me in the mood to use this thing and, by God, if you don’t think of something I’ll use it on you! I mean it. Now, go on.”

It led me to want to see everything Peck’s filmed.

Bob Dylan understood this when in 1986 he made Gregory Peck the focus of his sprawling, 11:05 epic, “Brownsville Girl.”

“Yeah, I’m standing in line in the rain to see a movie starring Gregory Peck
But you know it’s not the one I had in mind.
He’s got a new one out now.
I don’t even know what it’s about.
But I’ll see him in anything so I’ll stand in line!”

Of course, I eventually saw Peck in his greatest role, “To Kill a Mockingbird,” playing the character he loved above all others.

And, finally, I read the book. It is magnificent.

Peck became close friends with the author. His son Stephen told reporters he wishes his father was still alive so he could have protected her from the Murdoch greedmeisters desecrating her legacy.

“He so deeply felt the words he said in ‘Mockingbird’ you could barely separate the two,” Stephen said. “That was his best self. Those were his deepest, most closely held ideals. He was thankful everyday he got that part.”

Would Peck have played Finch in the new book?

“I’m not at all sure my dad would have played that one.”

I’ll do so until I become competent to write a fitting sequel to the prequel, one that will again elevate one of America’s greatest characters to his rightful pedestal.

That will obviously leave one task to restore Lee’s legacy.

Obama hater turns me into Atticus

Chris: I wonder if the latest novel isn't a more honest version of the south about which Ms.Lee writes. To Kill A Mockingbird is a wonderful novel but I wonder if it is fundamentally dishonest about the south as it existed at that time. Knowing what we know about our system of justice at that time,especially below the "Manson-Nixon Line",would it really be likely a black man accused of the crime in this novel would have received a vigorous defense? He probably would have been lynched. The book is best digested as a fable,methinks.

Good point, Tom. Maybe the idealization of one great man is what makes it to wonderful. A fable, yes, but, oh, what a fable. Thanks for your comment!