Fanning vs. shark: We need a rematch! 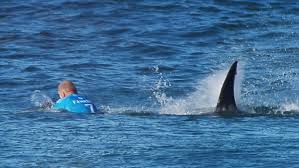 I wonder if they got the idea from Katy Perry’s Super Bowl performance, the one where the infamous “Left Shark” nearly stole the show.

A shark at a world surf competition in South Africa nearly one-upped the Perry shark.

Surely, you’ve seen it by now. One moment, Fanning is there kneeling on his board, then you see a giant black fin.

What happened next was too rapid to even cue the theme from “Jaws.”

The shark hits him and down beneath the waves he goes. He disappears for about 12 seconds.

In those slim seconds, I began to wonder if surf contest handicappers ever factored potential shark attacks into the odds.

Then the rescue craft race in, retrieve Fanning and take quick inventory of his essentials. He is whole.

He later said he’d ferociously and relentlessly punched the shark in the face until it meekly swam away.

It’s a potentially life-saving lesson for a pacifist like me whose instinct when confronted with an attacking animal is to first acknowledge its challenging upbringing and then attempt to reason with it.

The clip then continues and three shrill siren blasts signal the competition is over.

Who ever made that arbitrary decision should at the very least be fired.

Fed to the shark with the still-rumbling tummy, maybe.

Cancel it? Right then?

Heck, the announcer should have caught his breath and said, “Don’t even think of changing that channel! Competition will resume right after this word from Old Spice!

The entire world would have tuned in.

Surfing in shark-infested waters would have really raised the stakes.

I think the surfer dudes would be game, too, and I don’t mean “game” in the predatory sense.

Seeing world class athletes motivated by something more than a paycheck is utterly thrilling.

Take it from me.

I once performed under similar circumstances.

It was something called, I think, the Presidential Fitness Challenge. It was a grade-school staple administered during the Nixon administration by a president who was later deemed unfit for office.

It a torturous week of sit-ups, push-ups, pull-ups, etc.

I remember we went off in sets of two and I remember my opponent taunting that he was going to beat me.

I think I shrugged. I guess I hadn’t yet learned to give a guy like that the finger.

I couldn’t have cared less.

That’s why what happened that day was so remarkable.

The gym teacher said “Go!” and I sort of sauntered out of the blocks.

I went about 25 yards and noticed the guy already had a sizable lead.

Then I heard a roar of alarm, not unlike the buzz you hear when Fanning saw the fin.

I looked back and saw a large dog was loose on the field. In my memory, it was a a fire-breathing Rottweiler — and it was coming straight for me. I remember being terrified.

That was the day I set the 4th grade 100-yard dash record.

I’d have the ribbon to prove it, too, but I didn’t stop running till the 7th grade.

Fanning has vowed to return.

I have to think so. He’s probably being roasted on shark social media for his failure to close in the clutch.

Savvy promoters must be aware of the possibilities.

The three “Jaws” sequels weren’t any good, but they still made money.