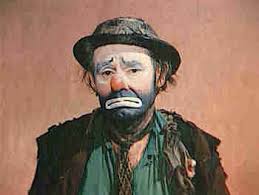 I was enduring the monthly drudgery of squaring both mine and my poor mother’s bills when I realized I’ll never be rich.

I sat back and thought to myself, “Man, I’ll never get ahead.”

I’ll never be able to buy the things I want. I’m bound to go to restless sleep each and every night for the rest of my life aware that before dawn my little boat might spring a leak and I’ll be sunk.

Of course, I’ve had this thought since I became a wage-earning adult, but there was something different about this time.

This time, I realized it’s okay. I’m going to be all right.

In fact, I’ll be better than that.

I’ll be at peace.

I don’t know why I’ve spent so much time worrying about money I’ll never have when I have all I’ll ever need.

We have a nice home. It’s not big, but it is filled to the rafters with love and laughter.

I have so many friends. Sure, they’re the kind of friends who when I told them I’d need help moving my office this week all announced they were having simultaneous lower lumbar surgeries, but that’s just what true friends do.

I do what I enjoy. Writing like I do will never be lucrative, but it is so much fun. And writing offers opportunities to travel in ways that make many more well-off people envious.

Of course, like any responsible parent, my greatest concern is to provide for my darling daughters.

Now, this I’m sure is bound to sound callous, but here goes …

My father was even more broke than I and I never once resented he didn’t pay for college or leave me a tidy nest egg.

In fact, I’ll never forget the awkward lunch he had with me and my brother where he shed tears about his failings.

“I’ve never been able to give you boys the things other fathers could,” he said. “But I want to give you this.”

He handed us brochures from a local funeral home that detailed what a gracious gift self-pay funerals were to family survivors. Through his tears, he said he was taking the steps to ensure we at least wouldn’t have to worry about being blindsided by the cost of a funeral.

“I just wish I could do more.”

He was a very emotional man.

He was also a liar.

He didn’t pay a cent toward his funeral.

In fact — and I don’t think (at least I hope) it was deliberate — but when we got into his car to drive to the funeral, the gauge was hard on “E.”

We had to pay to gas up his car so we could drive it to the funeral for which we eventually had to pay.

But, oh, how we loved that man.

And parking at his funeral was a real bitch, a standard by which you can judge just how beloved a decedent is.

There’s a post making the social media rounds about how it's all gone so wrong. It is attributed to George Carlin (which doesn’t mean it’s true).

It says we’ve succumbed to a mutual madness where we chase things that have no meaning while ignoring the meaningful things right there in the room.

The line that sticks with me: “We’ve added years to our lives, but not life to our years.”

I’ll forever more be a conscientious objector to the rat race mentality that so consumes and ruins so many.

I’ll no longer feel like a failure because I don’t earn what others think I should.

I will celebrate the freedoms that come from not stoking the maddening ambitions that drive others so crazy.

My new motto is:

Wish me luck selling that line of crap to Val and the kids.

The Life & Death of Joe Pittsburgh

Families, friends and the people who make us who we are

The day I staked out Charles Bronson’s mom’s funeral