The Greenbrier, The Bunker & and the larger-than-life billionaire who owns them both 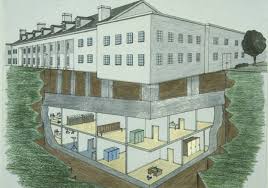 The Greenbrier pays such meticulous attention to detail it has an historian named Walls giving bunker tours.

I didn’t check but I have to imagine they have at least one chef named Cook.

Being a history buff, I’d been looking forward to the bunker tour since its top secret existence was revealed in 1992. Officially known as “Project Greek Island,” the bunker was conceived by President Dwight Eisenhower as the secure location where America’s government would endure in the event of a cataclysmic attack on Washington, D.C.

It’s Uncle Sam’s fallout shelter, the urgent destination of the men and women America would rely upon for governmental continuity in the event the unspeakable became reality.

So since its founding in 1778, The Greenbrier has been the place fortunate Americans want to go for the kind of nights they never want to end, and since 1962 the place to go if you think the world might.

The secret spilled in 1992 when the Washington Post published the story headlined: “Last Resort: The Ultimate Congressional Hideaway.”

Other banner headlines included: “Hotel Armageddon,” “The Secret is Out! Bunker Was Ready in Case of Nuclear Attack,” and — my favorite — “For Congress, Apocalypse Wow!”

Seeing the bunker has been a goal of mine ever since.

So I was confounded when Linda Walls informed me that I, in fact, had been in the bunker before.

Not in a previous life.

I remember the beef convention was like what the inside of Willy Wonka’s Chocolate Factory would have resembled if Willy Wonka had been a rapacious carnivore.

So I wasn’t there for Armageddon.

Or maybe a better description is MOO-phoric!

And, in fact, the whole thing was taking place right inside the top secret bunker, a place ingeniously designed to hide in plain sight, a place so secret yet so exposed that for three decades none of the world’s top spies knew existed.

“It was one of the great secrets of the Cold War era,” Walls said. “It was built with the knowledge of everyone — you couldn’t conceal its massive construction — but no one knew its true purpose.”

The former U.S. Government Relocation Facility was announced under the guise of being the resort’s new West Virginia Wing. The still-functioning wing sits atop the concrete-and-steel reinforced bunker burrowed 720 feet into the hillside beneath the rooms.

As life-preserving places to wait out a nuclear winter go, the bunker’s not bad: Think of an underground parking garage, but with MREs, board games and bunk beds.

In the event of crisis, massive steel blast doors would slam shut and the exhibition hall would transform into congressional work space.

“DANGER: HIGH VOLTAGE” signs kept curious snoopers from entering more sensitive areas like the a self-contained power plant, dormitories, a cafeteria/kitchen, laundry, a dispensary clinic and a communications briefing room from which congressional updates would be broadcast to those who hadn’t been annihilated — and could still pick up a stray TV signal.

It was all maintained at instant readiness by a small cadre of secret agents working for the fictitious Forsythe Associates, ostensibly a group of techs serving the resort’s many audio visual needs. The  ruse included a rotating stock of disabled TV sets in the main office.

The sprawling facility was sealed by three enormous steel blast doors weighing 18, 25 and 30 tons each. The doors are so perfectly balanced, dainty people can open and close them with one hand.

Touring it today makes you nostalgic for when the U.S. government could work together to get big things done.

He's Jim Justice. The West Virginia native is one of the richest men in America -- Forbes lists him as being #368 --  having amassed a still-growing $1.68 billion fortune through coal, corn and timber interests.

It’s no exaggeration to say he’s likely made a million dollars in the time it’s taken for you to read this far.

If that makes you angry, you can commiserate with Marriott Hotel executives. They in 2009 where in line to purchase The Greenbrier until Justice swept in and cut through the tangled deal with a $43 million cash offer too good for CSX owners to refuse.

The news was greeted with little enthusiasm by West Virginians who cherish their heirloom resort.

“Just 11 days ago, Greenbrier workers ratified new collective bargaining agreements thinking they were hitching their wagon to a world-class hotelier,” wrote George Hohmann of the Charleston Daily Mail at the time. They didn’t dream “they’d end up working for a coal guy who hasn’t even run a bed and breakfast.”

He’s lived his entire life within 50 miles of The Greenbrier and remembers telling friends the first time he saw it he felt like Dorothy did when she first spied the Emerald City.

He recognized it as a place where dreams come true.

Since purchasing the property, he’s poured more than $300 million into upgrades and just last week announced he’s hired Arnold Palmer, Jack Nicklaus, Lee Trevino and Gary Player to build a championship got course capable of hosting the U.S. Open by the 2023.

He spent $30 million on a state-of-the-art NFL training facility and succeeded in luring both the New England Patriots and the New Orleans Saints to the resort to conduct summer camps.

He’s the titled owner of 47 companies and still finds time to stoke his competitive juices by coaching both the boys and girls Greenbrier East high’s basketball teams.

And, oh, yeah, he’s running to be the Democratic nominee for the 2016 West Virginia governor election.

If elected, will he be as successful in public office and he’s been in private?

But know this much: he’s like to remain the same cheerful and ebullient leader as he’s been through a very exuberant life.

In short, despite one of his more unusual possessions, Justice is unlikely to ever be the kind of guy who succumbs to bunker mentality.