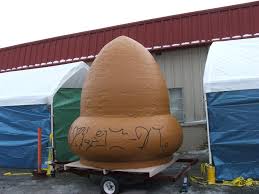 In a week where Stephen Hawking vowed to spend $100 million to detect aliens and Donald Trump counter-vowed to spend twice that much preventing them from crossing our Southern border, Val and I marched in a parade celebrating the little green kind that make Trump’s border jumpers look like simple pikers.

It was the 50th anniversary celebration of the Kecksburg UFO incident!

Kecksburg is a tiny rural community about 20 minutes from our home.

On Dec. 9, 1965, at 4:47 p.m., locals as far as Pittsburgh were startled by a sonic boom. An inexplicable crash was reported in a wooded area near Kecksburg.

Investigating witnesses said they saw an acorn-shaped craft about the size of a Volkswagen Beetle in a smoldering pit. Its base had what one witness described as hieroglyphics etched into the sides. Soon shadowy government officials emerged and brusquely ordered everyone to scram.

Next, an empty flatbed truck approached the site. It left shortly afterwards, but with an acorn-shaped cargo about the size of a Volkswagen Beetle beneath a concealing tarp.

Add that one investigating witness, local radio reporter John Murphy, became despondent and abruptly stopped all his inquiries after being visited by two mysterious men in black suits, and that Murphy was four years later killed in a still-unsolved hit-and-run while vacationing California, and you’ve got all the makings for a dandy conspiracy theory.

The good people of Kecksburg took this all in 2005 came one rationale conclusion . . .

We can capitalize on this!

Thus, a typical local volunteer firefighter fair was turned into a three-day UFO extravaganza, complete with parade and expert speakers like my friend Stan Gordon, author and producer of the award-winning documentary, “Kecksburg: The Untold Story.”

Our friends Marty and Sue are avid attendees. They’ve never had a close encounter, nor are they wacko conspiracy buffs — at least they weren’t before Saturday.

Marty, it should be noted, was essential in helping me construct the giant slingshot that became the centerpiece of one of the world’s best parties (link below).

Marty spent the past six months divining a plan to win the Kecksburg parade float trophy.

We showed up Saturday morning in his basement for a strategic briefing. There were chalkboards, maps, discussion of pivotal roles, etc.

So it was like Gen. Eisenhower and the day before the D-Day invasion only with an open bar.

Everyone had a role.

Some were costumed aliens, some where military, some were civilians. Val and I were tasked with the relatively lame duty of carrying the sponsoring sign — “Neon Moon Saloon,” (Marty and Sue’s basement bar) — and bringing the entire parade to a complete and sudden 2-minute halt in front of the judges’ station.

That Marty was bringing an “Animal House” aspect to a community parade appealed to the anarchist in Val and I.

We non-aliens were all issued ET-themed shirts. My favorite showed a stereotypical alien and the slogan, “Keep Calm and Enjoy The Probing.”

Our float — a pick-up truck carrying two laundry baskets taped together and concealed with a tarp to appear like an acorn-shaped UFO — was third in a parade of about 50 elements, about 40 of them, this being Western Pennsylvania, being shiny firetrucks.

Things got off to a rocky start when the first two elements raced through the parade route like they were in a hurry to get good Kecksburg VFD bar seats.

It was unfair, because that was our goal, too, but most of us were on foot and by then stumbling.

So the interminable lag made it appear to confused parade attendees our float was the start of an entirely new parade.

Honestly, we were worth the wait.

Despite temperatures in the 90s, high humidity and varying stages of inebriation, none of our aliens passed out, which would have been unfortunate, but may have won us points for authenticity.

Less a float, and more like a rolling skit, the aliens were hassled the entire way by our uniformed military who herded the aliens with supersoaker squirt guns and shouted at the hapless civilians, “You didn’t see anything! This never happened!”

It was a great time, and the crowd loved us.

That’s why we were all stunned we didn’t win even a third place trophy.

I don’t know who won, but bar-stool conspiracy theorists are saying it was all fixed.

I’d call for a probe but in Kecksburg during the UFO Festival you just don’t know what calling for a probe’ll get you, so I’ll just stick with the company line.

I didn’t see a thing. It never happened.

North Koreans could benefit from a giant slingshot

Newt, the Alien & me

One way tickets to Mars

Wouldn’t it be great if Flight 370 were found with everyone alive?