The day I staked out Charles Bronson's mom's funeral 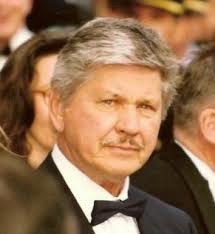 Of the more than 1,000 stories I did for National Enquirer back in the ‘90s, my wife’s clear favorite is the one about what happened when I staked out Charles Bronson’s mom’s funeral.

I think I know why.

The story contains an appealing mix of bumbling incompetence, delightful coincidence, and a surprise happy ending. So it was just like a Muppet movie without all the feathers and felt.

Of course, to some the story contains elements of morally questionable behavior on  my part and they find it wholly distasteful.

So, to some, it was just like a Charles Bronson movie without the buckets of fake blood.

Born Charles Buchinsky, Bronson died in 2003 at the age of 81. He was a terrific actor with western Pennsylvania roots (Ehrenfeld, Cambria County).

His biggest success came with the “Death Wish” movies. In those five blockbusters, he played Manhattan architect Paul Kersey, an avenging angel who slaughtered evil-doers who’d made the lethal mistake of harming his loved ones or other hapless innocents.

It’s the same formula with which Liam Neeson’s succeeding in the campy “Taken” films.

It was back in the mid-90s I got a call from one of my Enquirer editors saying they’d gotten a tip that Bronson’s mother, a Mrs. Buchinsky, had died. They wanted me to attend the funeral to observe and ask Bronson how he was doing.

Now, this wasn’t my favorite thing to do. I loved writing features for Enquirer, stories that ran under headlines like, “Town Saved By Giant Ball of Twine!” Or “Puppy Love Turns Girl, 6, into Petty Thief!”

I had so much fun working for them, and they paid great, too. So I wasn’t going to say no if they gave me an assignment that involved something unsavory or morally objectionable.

It was all part of the job. And, yes, I enjoyed the skullduggery of a juicy celebrity caper.

If you’re going to be a premier reporter for one of the world’s most notorious magazines, you can’t pick and choose.

So I summoned my ace photographer and off we went to a Butler-area funeral to chronicle the grieving of the man who was once one of Hollywood’s brightest stars.

My photographer was more skittish than I. He slinked up the hill with his long distance peeper lens to hide amongst the tombstones. He told me later he was approached by a suspicious maintenance worker.

“I told the guy I was there to get pictures of Charles Bronson. I told him I wasn’t exactly proud to be sneaking around a cemetery, but that these assignments helped feed my kids. He said, ‘Do you think I do a lot of bragging that I spend my days digging graves?’”

Me, I discreetly snuck into the chapel and began scanning the tear-streaked faces for the widely recognizable one.

Then I saw clear back in the third row the silver-haired profile of one of America’s most successful actors. I remember thinking it odd that he wasn’t in the front row.

Maybe the star had an appealing shyness about him.

I told this story in the bar the other night and my bartender reacted with true repugnance. He was appalled.

“That’s obnoxious,” he said. “I don’t care if he was a star or not, these people had a right to privacy.”

He had point. But I thought it was ironic that this bartender whose job it is to inebriate folks like me had suddenly turned into the ombudsman for The New York Times.

But he was wrong. I was perfectly discreet.

I lingered in the back and listened as the minister delivered the standard eulogy for the widow Buchinsky.

She loved her family. She loved to bake. She enjoyed beach vacations at Ocean City. Taking care of her cat Buster brought her joy. There was no mention that she’d raised one of America’s most marketable movie stars.

I kept my eyes glued on the stoic Bronson. My plan was to approach him after the burial.

So I was surprised when Bronson beat a hasty exit before graveside services.

In my mind, I saw the eventual Enquirer headline: “Bronson blows off Mom’s Burial!”

I decided to stay with the family. My plan was to wait there through the burial and approach them as they made their way to the parking lot. When that time came, I straightened my tie and fell in line with the front row mourners.

“Excuse me,” I said. “I’m sorry about your loss. I’m a local reporter (true, in a shady sort of way), and we heard about Mr. Bronson’s mother. His fans would love to know how he’s doing (also true).”

The woman was baffled. She wanted to know: Who’s Mr. Bronson?

She said she was sorry, but she had no idea what I was talking about.

I told her she didn’t have to pretend. I knew Charles Bronson had been here to grieve for his late mother.

Now, I’ve dealt with many able liars in pursuit of difficult stories and I began to sense right away she wasn’t one of them. This was a sweet woman, about 60, who’d just buried her mother. She wasn’t dodging. She wasn’t insulted. She was just confused.

That’s when another man spoke up.

“Oh, cousin Frank! Yes, he looks exactly like Charles Bronson. He runs an auto body shop down on Maple. Frank and Mom were very close.”

She couldn’t have been more dear. She apologized to me, in fact.

“I’m sorry you had to waste your time,” she said. “Nothing newsworthy ever happened to my mom. The highlight of her entire week was getting the mail the day National Enquirer came out.”

“Oh, she loved to read all the stories about the celebrities and what they were up to. It’s all she talked about.”

“Well, let me come clean,” I said. Then I told her that the old widow Buchinsky’s funeral had been staked out by two hired guns working for National Enquirer. I told them all about our preparations, our sly deceptions and pointed to the paparazzo lurking up behind the mausoleum.

That’s when these five grieving family members collapsed with laughter. They were just overjoyed.

I’ve never worked on a single story that brought so much instant joy to the unwitting subjects.

I’m sure it’s still the first story many of them tell whenever recounting the life of the widow Buchinsky.

When I’d phoned in to report the non-story to my editor, he already knew. Their tipster had had it all wrong. Charles Bronson wasn’t fixing dented fenders down on Maple.

He was vacationing in France. His mother had been dead for years.

And that’s my wife’s favorite story from my National Enquirer days.

Guaranteed, you can go the rest of your life and never hear another story about two dead moms that has such a happy ending.

What happened when I spent 72 hours handcuffed to my fiancé

I have no middle name (& how F. Murray Abraham got his enigmatic F.)