With watch, Apple continues to trivialize its potential. Is iToaster next? 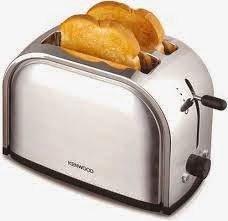 I don’t mind that Apple is now unleashing a wrist computer for people who are, I guess, too lazy to reach in their pockets to accomplish the exact same task.

It’s the natural trajectory I fear.

There’s something we use every day that could use some techy zing. After all, the only thing a toaster does is toast bread. What good is that?

Talk about your lazy aversion to multi-tasking.

I have to think the Cupertino geniuses must get restless when they’re marooned there in the kitchen making the morning toast. Their toaster can’t play music. It can’t be used to text clever emoji. It can’t access Candy Crush.

What the hell are consumers supposed to do for the 90 or so seconds it takes to turn a piece of sliced white bread tan?

With every new release Apple trivializes its legacy and potential — and that’s coming from someone who loves Apple product’s for their mostly glitch-free ease of use. In fact, this blog is being composed on a MacBook Pro I purchased in 2009. In computer terms, that’s practically Jurassic.

They laugh at me when I take it in for genius bar answers to operational questions I can’t resolve myself. They can’t believe it still runs.

I invite them to step out in the parking lot and see my 2007 Saturn Vue. I’m sure that’ll knock their hipster socks right off.

“You’re really missing out,” they say. “The new ones are so much more fun and they’re way faster.”

They sound like giddy drinking buddies urging a newly divorced pal to join them for a randy night of grab-ass out at the local singles bar.

No thanks, men. My computer is fine. It excels at its primary function — numbskulled blogging — and I’ve even used it to produce promotional YouTube videos that are appreciated for their decidedly amateurish bent.

In fact, my only complaint these days is the latest upgrade installed an overly aggressive spell-checker. It won’t let me type the deliberately misspelled words I sometimes use to flavor my stories.

For example: “teasetoserone.” That’s my self-coined word for the surplus hormones released when men view so much pornography they become consumed with ambitious lust, thus making them universally repulsive to otherwise willing females.

I have to plead with spell-checker to allow me to use it. It keeps changing “teasetosterone” to “testosterone.”

Spell-check doesn't get my jokes. I wonder if spell-check was programmed by my wife and kids.

Of course, as problems go a trigger-happy spell-checker is picayune compared with what’s going on in the world.

Terrorists run amok, food and water scarcities are on the rise, sectarian violence rages and climate change is getting scarier everywhere but semantic-sensitive Florida where it’s a good thing they have plenty of beach sand in which to bury their heads.

For now, at least.

Yet Apple, soon to be history’s first trillion dollar company, continues to find new ways to sell us mostly newer versions of things we bought 18 months ago.

The world is going to hell, but thanks to Apple at least we’ll all be groovin’ when we get there.

They must know how they’re failing the world. They have the resources and brainpower to make a real difference.

They shouldn’t be satisfied being a model of corporate excellence.

They should be revolutionaries.

I can only hope the rumored Apple car is a step in that direction. I’ve long argued they should take one year off — one year! — from tinkering with all the silly toys and devote all their attention to updating the 18th century technology behind the internal combustion engine.

It would change the world.

Yet Apple seems content using all its money and resources simply to acquire more money.

We don’t need a new Apple watch to tell us the clock is ticking, that time is running out for fixing our most pressing problems.

And if someone doesn’t do something soon, we’re all toast.

How green are my Apples? Recycling my old iPhone

Pillow talk about my new iPhone