Happy Fourth Birthday to our furnace! 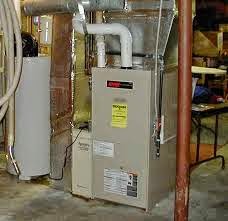 Because we celebrate the special occasions of our inanimate household objects, the girls didn’t think it odd that I told them it was time to go downstairs and sing Happy Birthday to the furnace.

The furnace turned 4 on Tuesday.

I’ve in the past gone so far as to celebrate the furnace’s birthdays with candles and cake.

Nothing like that this year and I feel a little bad. The girls enjoy it because it’s another kick in the shins of the enduring winter monotony and because, gee, who doesn’t like cake?

If the furnace resents the slight, it hasn’t shown it. It hasn’t underperformed or petulantly shut down. It provides steadfast heat and comfort for my family on the most bitter nights.

Heck, if it could detach and hop outside to help the girls build a snowman you could make a case that between me and it the furnace is the more essential provider.

Really, it’s been a great furnace, especially for a 4 year old, a notoriously difficult age for human toddlers.

I should start posting humblebrag pictures of it on Facebook.

I’ve heard of some Native American tribes that believe every object is bestowed with a soul.

I have trouble believing parts of that because I know far too many soulless humans. Why would the creator give a soul to, say, our rusty old toaster, but not one to a notoriously cranky bartender at one of the neighborhood joints?

I once did a story for Maxim about the implications of Anheuser-Busch putting “Born On” dates on their popular beers. This was about 15 years ago and the marketing idea was to reassure drinkers that their beer was fresh and all what I guess you’d call beer zingy.

It was yet another triumph of marketing over substance because none of the beer drinkers I ever knew, starting with my sudsy old man, had ever once before fretted that his or her beer was “too old.”

All Dad cared about that it was cheap, cold and nearby when he needed it.

A worse son than I would lasso the obvious Mom joke in there, but let’s move on.

So I decided to have some fun with the absurdity.

If beer in beer cans had born on dates then beer, like their human consumers, had astrological signs.

If, say, a beer was born on September 25, then it was a Libra. That meant the beer was a peacemaker, enjoyed board games and was prone to stubbornness.

A beer born on June 22 was a Cancer. It was shy around strangers, enjoyed rainy days in front of the fire and found joy in simple things.

The story, in fact, involved actual research. I called a bona fide astrologer and together we went through every astrological sign and I drank a corresponding beer for all 12.

In the end, we concluded I was compatible with every beer.

So I got paid $500 to get drunk. Maxim editors even paid for the beer, bless their marble sized-hearts.

Ah, those were the days.

So you see I have a fondness for personifying inanimate objects. And I think it’s important to share this affinity with my daughters.

I want them to appreciate all the things in the house that help the house be a home, the little things that add security and civilization to our sometimes choppy lives.

So, by all means, let’s celebrate our inanimate objects.

It’ll be good for the girls to know to cherish all their inanimate objects, especially when they have a father who seems destined to become one.

Pond’s new bartender debut … Me (and beer can astrology)!

My affection for inanimate objects

Email ThisBlogThis!Share to TwitterShare to FacebookShare to Pinterest
Labels: beer born-on dates, beer can astrology, drunk on the job, furnace facts, how old is your furnace, Maxim magazine, objects with souls

I always thought you celebrated the birthdate of your bar stool?!!!

We're very close! I'll be there tonight. You?

I think it is lovely how you stick to your habits. And it’s always nice to know that families have their own fun way of celebrating the little things in life. Anyway, how is your furnace holding up nowadays? I hope things are doing just fine. Thanks for sharing!

Thank you, Tommy! Very kind of you to read. Yes, the furnace is still doing fine. We baby it. Good luck with your ACHV biz.

It seems like the furnace has done you a great service. It even reached the point where the only thing it didn’t do is to build a snowman with the girls. Hahaha! Anyway, I love this thing you do where you celebrate your appliances’ birthday; I think it teaches us appreciating the important things in life. Thanks for sharing this, Chris. All the best!

Thank you, Brett! I appreciate your appreciation. I hope you'll continue to check out the blog.

I hope it wasn’t that difficult for you guys to let go of those things you treasure so much. Anyway, I hope that furnace is still functioning at its best, and that it never fails to satisfy your needs. Thanks for sharing!

Thanks, Randall! Glad to know one post about a furnace draws so much flattering interest from the industry. Have a great day!