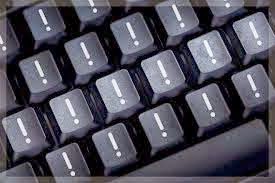 I’m not saying staying home from church to read this September re-run is acceptable, but this is a thoughtful discourse on how to make the Bible more fun to read. Hint: Just add !!!!!!!!!!!

605 words)
Did you know keyboards prior to 1970 didn’t even include an exclamation point? Before that you had to type a period, backspace and then type an apostrophe above the period to make “!”