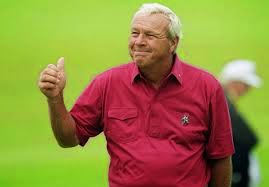 I woke up today believing this could be maybe the best week of the whole year. I encourage you to indulge that feeling right along with me.

It’s a helpful Monday mindset because the alternative is likely to depress.

First of all, it is indeed Monday. The weekend will never be more distant. That’s very unfair to Monday. When I run the world, we’re going to rotate the weekends throughout the week.

Either way, Monday will be out of the way soon enough.

One of the reasons this could be the best week of the year is it heralds the reemergence of Arnold Palmer. His Bay Hill tournament begins today and runs through Sunday.

After a long cold Latrobe winter without Palmer, it just feels better knowing he’ll soon be back in Pennsylvania.

Palmer’s 85. That’s old in me and you years. Not in Palmer years.

Anytime I hear anyone say no one lives forever, I point we won’t know that for sure until the final stories of Palmer and Keith Richards are told.

The two have never met. But every day that passes increases the chances that they one day will. I think they’re really going to hit it off. I think Palmer will teach Richards how to golf and Richards will teach Palmer to play guitar.

Richards will tell Entertainment Weekly if he’d have known Palmer in ’64, it would have been Palmer rather than Jagger singing “Satisfaction.”

Another reason the could be the best week of the year?

It is maybe our greatest and certainly our most unifying sporting event on the entire calendar.

Most of America went into this Super Bowl hating the Patriots for being arrogant cheats. I was fine with that right up to the last minute when it looked like they were going to suffer a heart-breaking loss and that made me very happy.

Then the Seahawks blew it on an inexplicably bone-headed call. So I woke up a godforsaken Monday near the middle of bitter winter hating two teams.

March Madness features 68 college basketball teams. It’s harder to hate college players because most of them are still a few years away from having fully realized rap sheets. So they’re easier to root for.

Sure, there’s a few villainous teams, this year it’s undefeated Kentucky, but when they lose — and I think they will — it’ll be like a national holiday. Everyone will be happy, even those who have their brackets blown to bits.

That’s the beauty of March Madness. Just about every body has a stake and it’s usually minor enough and the odds long enough that losing does not devastate. And the upsets and Cinderellas add real romance to the tournament.

So having near-round the clock meaningful basketball on for four days at the end of this week adds to the luster of what could be the best week of the year.

And the weather continues to improve! The sights, sounds and smells of the sweeter seasons are everywhere. That’s wonderful.

Well, for me, there’s this: I’m getting paid to talk to 8th graders on Wednesday!

I’m very excited about this. Nervous, too, because I want it to be spectacular. If it goes well and supervising adults recommend me to their colleagues it could open up a whole new revenue stream.

I usually lean on a podium, but for this one I’m going to try and stroll around and just talk for the full hour. No notes.

The only thing that could be more brave than talking without notes to 250 8th graders would be talk to them without pants.

I think I’m so excited because I believe I have an opportunity to make a difference with a message that really resonates.

And what is that message?

Choose cheerfulness! I want them to know that most adults confuse emotions with decisions.

Being cheerful is a decision. So is pessimism.

So, sure, this week could suck. The weather could turn nasty, bad news could spring out of Washington, Iraq, Ferguson or right here at home. Arnold Palmer could trip over a putter and shatter a hip.

(Note: Palmer could break both hips and he’d still have hip to spare).