I shave my beard; Lucy, 8, charitably lops her locks 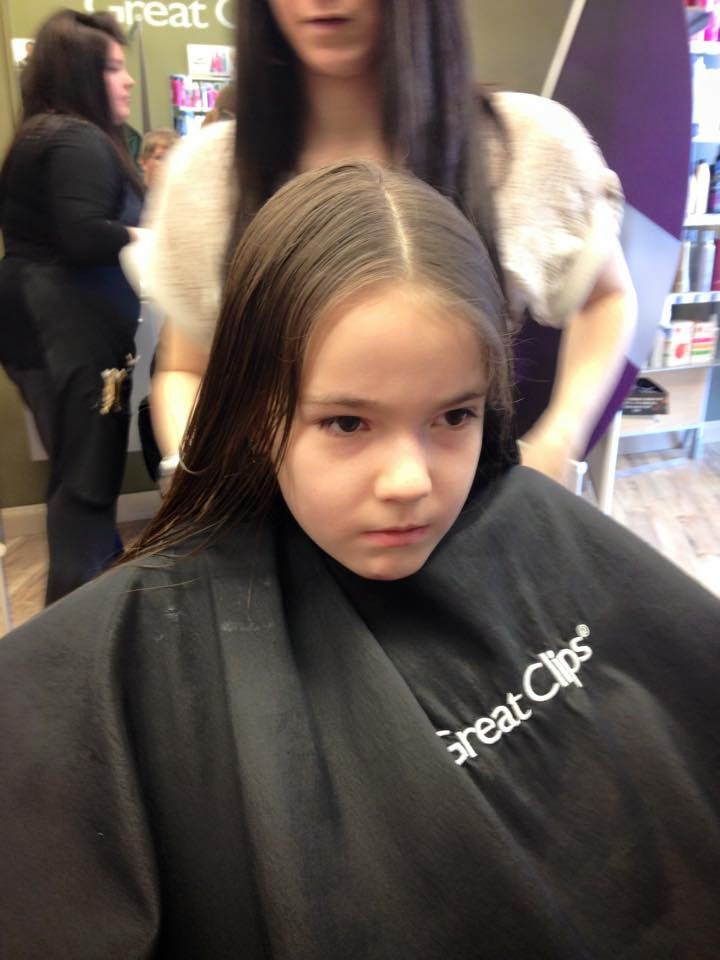 People are smiling this week when they see my face. It’s not because they’re eager to see me or because they think I’m going to pay back the $20 I’ve owed them since just before Christmas.

No, they smile because my face has become their spring-is-here forecast.

The dark, grey clouds on my face have lifted and have been replaced by pure sunshine, that is if the sun were a middle-aged Caucasian with splotchy skin and a salt ’n’ pepper mustache.

It’s been my custom the last 10 years to begin growing a sprawling winter beard the instant I see a five-day forecast that includes three consecutive highs in or below the 20s.

That didn’t happen this year until January 4. Remember, winter was a no-show through New Year’s. Then it came on with a vengeance.

It’s been nothing but squalls, dangerous conditions and so many unbidden deep freezes that the Polar Vortexes began to feel like in-laws: cold, unwelcome and prone to staying too damn long.

I began to think we’d never see three consecutive days with highs in the 50s or above, the meteorological trigger for tidy grooming.

I contend my forecast is more reliable than Punxsutawny Phil or the appearance of the first robin, even as some accuse me of being the true bird brain.

So there we were yesterday afternoon in the driveway, me the girls, my electric clippers and a make-shift barber chair. They each took turns nicking off the whiskers.

Funny, but it was actually the second ceremonial Rodell shearing in two days. The other was 8-year-old Lucy. She’s the one many adults call shy.

And any time an adult says any child talks too little, I tell the adult they talk too much, which is a far greater annoyance. Our shy people need nurturing; our excessive talkers muzzles.

Of course, Lucy isn’t shy. In fact, around the ones she trusts she never shuts the hell up. And everything she does fills my heart with joy.

That’s why I dropped what I was doing Saturday to go watch her get a hair cut. Not just any cut. This one was monumental.

She’d been growing her hair long for 2 years. It was down to her waist. It wasn’t because she’s pretentious about her looks.

She’d heard once the hair grew a full foot she could have it lopped off and donated to help a child who’d lost his or hers because of illness. So Val began asking about worthy organization and settled on Wigs for Kids.

Disappointingly, the decision required research. Val learned that a preeminent hair donor organization, Locks of Love, can’t account for $6 million a year in donated hair. The obvious suspicion is someone is taking donated hair destined for sick children and selling it to be made it into pricey wigs that get sold to well-off posers eager to look like one of the Khardashians.

The gall. That some immoral execs would corrupt something so pure just so they could afford the dues at a swankier country club is utterly repugnant.

Of course, Lucy is blissfully unaware of such adult chicanery as the stylist measures and secures her light brown hair into precise bundles.

She’s aware the hair is destined for an ailing bald child who, thanks to her, will have one less insecurity about which to worry as he or she battles their daily demons.

Knowing Lucy, however, I think she goes to bed at night dreaming her hair is flying through the air and will eventually secure itself to a wand-wielding fairy to whom it will bestow magic powers. The fairy will then visit her late at night and begin granting her every wish.

She’s too young to know that, in fact, she’s the one with all the magic, the one who’s making wishes come true.

Still, of the two of us I contend I’m the more altruistic.

I mean, she cut her hair and made one bald kid happy.

Me, I cut my beard off and everyone I see is happy.

How my facial hair determines out weather

Thank you for your post. This is excellent information. It is amazing and wonderful to visit your site.
Hair Specialist in Bangalore

Hello, I want to have one of these piercing models, but I am unsure. Can you look at it?