Will getting a harp help get me into heaven? 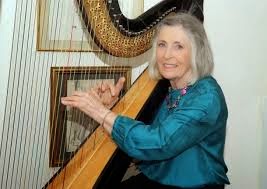 Because I believe it’ll increase my chances of getting into heaven, I’m thinking of acquiring a good used harp.

Being an skillful harp player might convince Pearly Gate keepers to overlook my sloth, my gluttony and all that chronic flatulence to help me make the heavenly cut.

The website is worth a browse. It talks about used harps with the same loving descriptions you see on some of the “who-wants-to-date-a-stranger!” sites.

“We may be prejudiced, but we believe this may be the most beautiful harp ever made! It was commissioned by a harpist in Boston and designed and hand carved by master woodcarver Will Neptune. It is the only one that was made and so is totally unique.”

Experienced cynics would likely respond to that puffery with, “Well, sure she’s a lovely harp, but what they don’t tell you is when you go to pick her up for dinner you find out she has five bratty harp kids.”

We took the kids to see “Young Frankenstein: The Musical,” last week. Loved it.

But I was distracted by the enormous harp rising from the orchestra pit. It was nearly as big as the monster. Yet the woman who plucked it looked a better match for the flute. How’d she lug that thing around?

I don’t know why I’m surprised harpists are often dainty. It is, after all, the angel’s instrument.

“If there’s a rock ’n’ roll heaven, you know they got a helluva a band.”

That’s what the Righteous Brothers sang in 1974.

That may be, but if you believe the Bible all the band is playing are horns and harps.  No Stratocasters, bass, keyboards or other instruments I consider essential to rock ’n’ roll heaven. No cowbell.

And no harps! I’m talking about your standard mouth organ which somehow became known as a harp, French harp or blues harp. The unnecessary confusion infuriates me.

I remember when I was a kid hearing Keith Richards say, “An’ ‘en Mick pulls out the ol’ harp anna place goes wild.”

I couldn’t picture Jagger plucking harp chords for some baroque version of  “Sympathy for the Devil.” Then I learned the English bluesmen (and American) all call the harmonica the harp.

It’s odd that there’ll be harps-a-plenty in rock ’n’ roll heaven, but I can name more great rock songs featuring bagpipes, three, (Steve Earle’s “Copperhead Road,” and AC/DC’s “Thunderstuck” and “It’s a Long Way To The Top”), than I can great rock harp songs, one, even though it’s the kind of “rock” song that sounds like it were composed by Franz Schubert.

It’s “She’s Leaving Home,” from Sgt. Pepper, one of just a handful of songs in which none of the Beatles plays any instruments.

I found her e-mail address and was tempted to get in touch. It’d be very cool for me to say I’ve corresponded with the woman who played harp on “She’s Leaving Home,” but it would be very disappointing for her, I’m sure, because she’d initially think I was a legitimate writer and then I’d have to explain the stupid blog name all over again.

She said the “She’s Leaving Home” session was very rushed and the only Beatle present was Paul.

"In actual fact he was quite difficult to work with because he wasn't too sure what he actually wanted. He said ‘No, I don't want that, I want something…' but he couldn't describe what he wanted and I tried it all every which way.”

I’m sure she’s speaking on a purely professional level and so I forgive the harpist for sounding like a harpy, which according to Greek mythology is a nasty monster with a woman’s face and body and a bird’s wings and claws, which sounds more like Yoko than Bromberg (pictured above).

And that’s all I’ll say about that. On the topic of harps, I'll harp no more.

I have some running around to do.

All together now: “‘e’s leaving home!”

Listening to classic rock with my senile mom