Return of the Creepy Homeless Posers (and my homeless history) 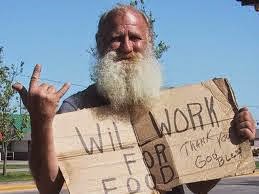 The weather is beginning to warm and that means we’re about to see the reemergence of a seasonal creature that first began appearing in these parts last spring.

No. I’m talking about the Creepy Homeless Poser.

I saw my first one of the year last month at the Waterworks Mall near Oakmont. He looked like all the others, marooned as he was on the little concrete traffic island by the highway access to the busy suburban strip mall.

He wore what looked like a modified pea coat over khakis and held the standard “Will Work For Food” sign.

His face bore no expression. His eyes were downcast. He was as immobile as the stop sign beneath which he was perched.

I didn’t do it this time and I may not do it the next, but one of these days I’m going to slide down the window, lean my head out and ask, “Is this some kind of fraternity stunt? Because I know you’re not homeless.”

I don’t do this because I don’t want to do anything to jeopardize the fragile ecosystem actual homeless people endure.

I’ve done lots of rags-to-riches stories about former homeless people who were rescued from the streets by saviors, luck, internal drive or a really original idea. They’re the kind of bootstrap stories in which all Americans revel.

But I also understand the sad reverse. I know chronic homelessness is a heartbreaking blight on our nation.

I know because I was once homeless.

And it was during the day and I went home each night between my shifts, so you quibblers can deny I was even homeless at all.

It was one of those typical National Enquirer stunts stories which means it was anything but typical.

I was designated to grub up and spend a day sprawled on a busy downtown Pittsburgh sidewalk with a “Will Work For Food” sign. And because I could choose the sidewalk, I did it right outside where my dear Mother got off the bus to work as a receptionist for Mellon Bank.

She never even noticed me.

I’ll never forget the look of pained recognition. It was like all her I-told-you-so fears of my failings became realized right there on Grant Street.

I see that same look, incidentally, on the face of my wife near daily.

I told Mom it was for an Enquirer story. She gave me a buck!

What I remember most about that first day was how utterly worthless people made me feel. No one made eye contact. They pretended like I didn’t even exist.

I felt like jumping up and beseeching, “How can you just ignore me? I am a human being. We have so much in common. Honest! You could be me!”

And it was true. Even pretending to be homeless was very dispiriting.

I was back the next day. Same look. Same spot. But on this day I had a new sign. It read:

The reaction was euphoric. People laughed. They shook my hand. A cab driver stopped his cab in traffic to run out and stuffed $10 in cup.

“That’s the greatest sign I’ve ever seen!” he said.

So I recognize a stunt when I see one and that’s what I suspect is going on with these squads of motionless posers simultaneously infiltrating suburban strip malls.

These people aren’t homeless. They act like they’ve been instructed to act like a homeless person might act in the mind of some feeble academic’s imagination.

I suspect this is a study.

Of course, I hate to think they’re actually homeless people in need of succor.

So if you see one of them outside one of the strip malls and are earnest about wanting to help, just roll down your window and do something that will change their lives.

Won’t cost you a penny.

The $5 solution to end homelessness

Me for Pittsburgh mayor (including homeless guy Survivor)!