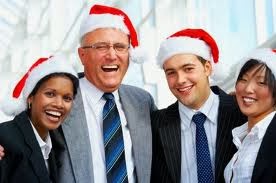 My plans to have another office Christmas party were again dashed by the seasonal chaos. That makes re-running this 2010 post about my canceled office party perfect. For some reason, this is a perennial favorite and the 9th most popular post I’ve ever written.

The world’s last, best office Christmas party is being canceled.

Why? It was a victim of its own success.

So who’s the Scrooge?

That would be me.

Those of you who were checking in last year have probably had Dec. 23 circled in red on your calendars for nearly a year. That’s the day I told readers from around the world they’d be welcome to jet into Latrobe to enjoy an old-fashioned Christmas office party with me in my shabby little one-man office above the town’s best bar.

In this recap of last year’s soiree, I admit to having been nervous about holding an office party.

After all, a traditional office party is supposed to involve just the people from the office. It’s an opportunity to unwind in an unrestrained environment where booze-loosened inhibitions are free to ramble.

This neatly describes every single day of my life, so I thought my gift would be to share it with the world.

And that’s just what I did. I printed up an invitation to friends and all honest strangers to come, smoke, swear, get loaded and enjoy my new haircut.

The ground rules were clear: there would be no rules.

The world is just so rife with rules -- even lousy party rules. You can’t smoke, drink too much or wantonly flirt without fear of getting slapped with a sexual harassment suit.

I was offering the last lawless Christmas party.

Here’s what I hoped would happen: I hoped everyone who entered would have one shot of high-test liquor and immediately start removing their clothes. Then, emboldened, they’d ask me to pour them another shot.

Nudity and drunkenness are still essential elements to any good time for me -- and I was eager to share those values with all my close friends.

Here’s what happened: Everyone came in and removed one item of clothing -- their winter coats (it was about 4 degrees that night). Then everyone began making polite small talk. Everyone seemed to be having a really nice time.

It was a crushing development.

I could have suggested we all hold hands and say a prayer for the less fortunate and it would have gone over well.

I know this is a contrary opinion, but I believe Christmas is the one time of year that could use a whole lot less peace on earth and goodwill toward men.

As someone who’s only had three steady jobs his entire adult life (two newspapers/one Pizza Hut), I feel like I’ve missed out on so much.

I see people going to office parties and think, damn, they must be having so much fun. I miss the camaraderie, the shared mission and the reckless opportunity to cut loose on the boss’s tab.

Maybe I’m just conjuring visits from the Ghost of Christmases That Never Were.

Maybe the Christmas parties where wives were swapped, stupid bosses were told off and everyone spent the rest of the year pretending nothing happened are as illusory as Marley’s old ghost.

We spend more time with our co-workers than we do with our spouses. People who endure the cauldron of trying to stay employed in a business that’s fighting just to stay above water ought to be entitled to cut loose at least once a year.

Last year’s party ended with the refrigerator still full of beer, the ashtrays mostly empty and everyone’s underwear all in place and accounted for.

Only one noble soldier stayed too late, got too drunk and joined me in making complete asses of ourselves later on downstairs in the bar.

Of course, that was Paul, and we’ve been doing that about three nights a week since 1989 so it wasn’t really Christmas special.

Maybe next year I’ll try again. Maybe people will be more in the mood to celebrate the true meaning of an old-fashioned Christmas party -- getting drunk and having fun!

But I can’t do it myself.

Email ThisBlogThis!Share to TwitterShare to FacebookShare to Pinterest
Labels: hitting on the boss's wife, how to throw a party, Latrobe office parties, Office party stories, telling off the boss, wild office parties