So why's everyone hate Bono? 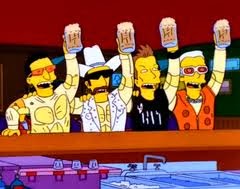 The biggest news story of the day is the outpouring of love over the death of Nelson Mandela.

That means the second biggest news story is the outpouring of hate over the life of humanitarian rock star Bono.

He is the lead singer of maybe the world’s biggest rock band and devotes much of his off-stage life to helping the poor and oppressed get a fair shake.

The hatred of Bono fascinates me.

I mean anyone who had anything to do with U2’s 1997 album, “Pop!” deserves our  eternal scorn, but the disdain for Bono is over-the-top. He is today being savaged for having penned a euphoric eulogy of Mandela that seems to emphasize their chumminess over Mandela’s legacy.

I think it must be people feeling affronted that a rock star would dare use his celebrity for anything other than, well, pussy.

He’s been married to the same woman since 1982 and most of us find that kind of steadfastness in the face of groupie temptation admirable.

Together the pair have four children and, hallelujah, I know nothing about any of them. I haven’t seen their clothing lines, heard their crappy bands, or seen their Vegas benders play out on TMZ. I admire any celebrity who today succeeds in raising bland, anonymous children.

I’m hot and cold on U2, but there’s no denying they are one of the world’s great rock bands.

I think they hit their creative peak in 1991 with “Achtung Baby,” an album that to me plays like the historic soundtrack for the demolition of the old Berlin Wall.

I like 2000’s “All That You Can Leave Behind” but agree most of their music since ’91 has been what they contend is “experimental,” a dodgy word bands employ when they’ve forgotten how to make the music that made them great.

Still, they have multitudes of ardent fans, and I’m friends with some whose opinions I respect say the 2010 tour was the greatest show they’ve ever seen.

So there we have Bono, the rock star, and there’s nothing really to knock. He’s a great performer with a great band with many wonderful hits. My favorites: “One,” “Stuck in a Moment,” “With or Without You,” “Bad,” “God Part II,” and “All I Want is You.”

And no one should ever forget how funny and self-effacing Bono and the boys were in the 1998 “Trash of the Titans” “Simpsons” episode in which Homer runs for Springfield Sanitation Commissioner against a character-voiced by Steve Martin.

You can be a sanctimonious and bigoted hack, but it means a lot to me if you successfully pull off your “Simpsons” cameo: See Mel Gibson, “Beyond Blunderdome,” 1999.

That leaves us with the increasingly attention-snagging “humanitarian” part of Bono job description.

The National Journal named him the most politically effective celebrity of all-time.  He’s campaigned on the benefits of Third World debt relief, and partnered with George W. Bush -- a man he routinely praises -- to help eliminate AIDS in Africa. He’s been nominated for the Nobel Peace Prize three times and is inspiring legions of youths to commit to authentic do-gooder living.

So here’s a man who does the world a world of good and is beloved by many. And, I guess, hated by many more.

He’s the face of what critics dismiss with the nifty phrase, “narcissistic philanthropy.”

I get it. I hate Brangelina, too, but the whole phenomenon intrigues me.

I think we all know what Bono’d say about the situation.

In regards to our rock stars, Mick Jagger nails in in “Monkey Man” when he sings, “Well, I hope we’re not too messianic or a trifle too Satanic.”

Bono’s critics would probably like to see a little more of the latter.

We’re cursed to live in an age when being good is being divisive.

What that means for solving the problems that plague us I do not know.

But of this I am certain.

It’s probably a good thing Mandela at the height of his powers didn’t dabble in making a crappy techno-rock album full of too much reverb and clever word play.

On what basis do you believe Bon is wodely reviled?

I hear anecdotal undercurrents of it all the time, but when he really pops off it becomes a news story. I saw a bunch of them after his eulogy ran. Here's one from HuffPo. http://tinyurl.com/kwblznn