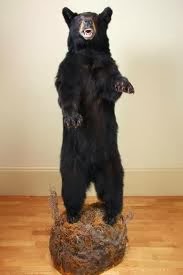 (739 words)
I used to describe Santa Claustrophobia as a childish fear of St. Nick, but am coming to believe it’s an irrational fear that Christmas is crowding us out.

That’s what’s been happening to me.

We got the tree on Saturday at a lovely local tree farm.

There’s a lot of charm in that sentence. It’s a hillside farm, snow was blowing, the kids were rosy cheeked and my mood was splendid, enough so that I let the kids pick any tree they wanted.

They picked a big shaggy 8-footer.

It wasn’t until we got home and put the tree in its stand that I realized we hadn’t brought home a tree at all.

And the omnivore is devouring our living room.

Our living room is a typical big square with fireplace on the left, a sofa facing the fire and a big picture window in the front through which we see many actual fur-and-blood bears. The essential TV is angled in the corner between the window and the hearth.

Opposite the picture window is the recliner where Captain Kirk would sit if this were the bridge of the Star Ship Enterprise. The fireplace and TV are to my left.

During the 11 sane months of the year, the layout works perfectly.

The sofa seat nearest the window is where Val likes to sit so she can read the papers. That means the seat next to her is the second most popular as the girls still find being near to her a cuddly comfort.

So there’s what I guess you’d have what interior decorators would call a feng shui sort of harmony, if feng shui involved an annoying squirrel-like chihuahua-terrier mix racing between each family member to snag a potato chip as it’s en route to a watering mouth.

When I compare it to an upright bear, it’s no exaggeration.

It’s about 8-feet tall and about 5-feet round. It’s cylindrically-shaped, more like an industrial basement water heater than a Christmas tree. It’s, of course, centered right in front of the picture window.

I tell you, us hillbillies have this feng shui thing down pat!

Its location means watching television for anyone sitting on the window-side two-thirds of the sofa is impossible, a matter of not seeing the TV for the tree.

So the sensible seating arrangements are all shot to hell.

Right now our daughters, ages 13 and 7, are absolutely on fire for Christmas. They’re doing advent calendars, elf on the shelf, chalk-board countdowns and decorating every square inch of the house in tinsel. They’re making their lists and they’re checkin’ ‘em twice.

Looming over it all is the hulking tree.

The girls love it.

But if the big tree weren’t there, we could look out the window and see several hundred trees in their natural habitat. I believe we don’t need to import one that’s going to disrupt our essential viewing habits.

It reminds me of the jungle room Max envisions in “Where The Wild Things Are.”

It might be so bad if the tree was inert. It is not. It remains a living thing that requires care and up-close attention.

I only wish it were a bear. Bears have just 10 exposed claws.

Our Christmas tree has, I don’t know, maybe 250,000 of them and the Red Cross uses less sharp syringes to siphon voluntarily donated blood.

So anytime I dive in to water it, replace a fallen ornament or add another string of popcorn, I emerge looking like a “Walking Dead” extra.

And it’s shedding like crazy. I feel like I should be wearing my Steeler game boots in my own living room.

And I know we’ll be discovering stray needles clear through Independence Day when at least in our home it’ll be Christmas in July whether we like it or not.

I think this is the live tree that’s going to finally cure Val and I of live trees.

It’s just such a pain in every sense of the word.

I think the kids will come to their senses when they realize a big, live tree hampers their ability to sit in their favorite spots and watch their favorite cartoons.

I think I know what they’ll pick.

Our big black bear is back

The good, the bad and the repaired TV

The TV has become the penis
Posted by Chris Rodell at 11:29 AM