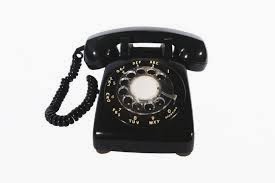 (1,023 words)
It’s a common marketing misconception that the clunky old phones are incapable of as many functions as the spiffy new smart phones. But in many ways the old phones were far superior.

For instance, you can’t murder anyone with your new phone.

I remember seeing mobsters in old movies bring those heavy black phones crashing down on the noggins of hapless stool pigeons.

There’s no app for that.

And you could probably strangle some noodle necked miscreant with the cord if you were really strong and patient enough to have all those coils unwind to a homicidal tautness.

I’m beginning to long for the days when phones used to be phone shaped.

For all it does on my behalf, I have very little affection for my iPhone. Maybe it’s because familiarity breeds contempt.

I know my iPhone better than I know the back of my hand. That’s probably because the iPhone’s usually in the front of my hand.

Today our phones consume our lives. We hold them. We respond to them. We care for them -- right up until the moment we leave them behind on some bar or accidentally drop them down a toilet.

No one every dropped one of those old phones into the toilet.

I fear the next generation of smart phones will be Chicklet-sized and the next great self-inflicted public health calamity will be phones getting stuck deep in our ear canals.

You won’t be able to walk down the sidewalk without some stranger saying, “Hey, would you mind looking in my ear? My phone got stuck in there. And here are some tweezers. Try not to hit the send button. I haven’t finished updating my Facebook status.”

The class action lawsuits will roil the industry.

Mostly, I’m missing the physicality of the those car-battery sized phones that used to sit immobile on desks or kitchen counters in every home in America.

I liked that five-seconds of fire alarm excitement that would happen whenever it rang and I was in the living room watching football.

I’d dash to the phone, my pulse racing in anticipation.

Then I’d get there and stop and stare at the ringing phone.

I’d stand there contemplating the possibilities for so long the caller would eventually conclude no one was home and would just hang up and I’d go back to watching the football game never knowing who it was or just what the hell they wanted.

The joy of slamming the phone down on some jackass was for those of us with insane rage issues felt euphoric.

It didn’t matter whether it was a telemarketer, a collection agency or an erstwhile pal, the hang-up countdown always went something like this.

The key was timing it so you’d achieve maximum agitation with just enough lag time that you could slam the phone down in the caller’s ear the split second before he did it to you.

If he’d beat you to it, you’d have to call him back and angrily shout, “Did you just hang up on me?”

You’d do this certain he’d answer because there was no caller ID and the guy wouldn’t want to miss what might be an important call. So this could go on all day.

Of course, the advent of caller ID ruined the cottage industry of prank phone calls to which I contributed so much ever since the fifth grade.

What only the truly devious know is that old phone mechanics lent themselves to great pranks.

It happened once at the Nashville Banner a few years before I got there. That was back when the Banner and The Tennessean were competing newspapers sharing the same floor of the same building. One night, reporters from The Tennessean invaded our empty news room, unscrewed the mouth pieces from every phone and removed the donut-like amplification devices inside that made talking possible.

So at about 6 a.m., all the Banner reporters came in and began routinely calling police sources throughout Middle Tennessee only to hear confused desk officers say, “Hello? Hello? Anybody there?” before they’d hang up.

The reporters could talk, but the officers couldn’t hear.

The only thing that could have made it any better is if the Banner editors stopped the presses to run a front-page story under the screamer headline: “STATE LAW ENFORCERS UNDER SEIGE BY BAFFLING PHONE OUTAGES!”

The old phones used to last 20 years. They’d deliver the news of births, deaths and be essential in building the connections that made those events relevant. Remember trying to have an intimate conversation on those phones with the whole family lurking? It’s amazing anyone ever got laid.

Today’s phones are obsolete in about two years. It’s a dreadful scam.

I saw Sam Malone do this to an old phone once on “Cheers!”

There’s a certain spot above where the receiver meets the cradle that if you karate chop it, the phone would spring right out of the cradle and into the sky where the deftly coordinated among us could snag it with a swashbuckling flourish.

Today, answering the phone involves a bit of a squint and a contemplative finger poke not unlike a chess master uses when he or she moves a bishop.

So, yeah, I guess I have issues when it comes to phones.

I’d call them hang ups but I wouldn’t want any younger readers feeling he need to poke at their smart phone for meaningful definition.

Smart phones, stupid people
Posted by Chris Rodell at 11:24 AM